In 1823, Captain N. D Kritsikii explored the uninhabited island Zmeinyi in the Black Sea. He designed the ancient building he had seen, right in the middle of the island, and made a list with all his findings. He already knew that this was the island “Leuce” or “Achillea”, the center of Achilles’ Cult according to some ancient sources. The hero was worshiped by the Milesian colonists as “Pontocrator”, the Lord of the Sea, and “Soter”, the Savior. Actually, Achilles was a domain deity in Pontic Olbia as well as in other Greek colonies nearby.

In Euripides’ “Andromache”, the goddess Thetis, Achilles’ mother, says to her husband Peleus, that he could visit their dead son in his home on the White Island (Leuce). Geographer Pausanias confirms the existence of the temple that is also a healing center recommended by Pythia of Delphi herself.

The most informative source about Achilles’ Island is “The Periplus of the Euxine Sea” by Arrian of Nicomedia.

Some call this the “Island of Achilles”; others call it the “way of Achilles”; and others “Leuce”, because of its color. There stands a temple and a wooden statue of Achilles, of ancient workmanship. It is uninhabited and pastured only by a few goats, offerings in honor of Achilles by those who land there. Other offerings are to be found inside the temple, like cups, rings, and the precious gems. All these are offerings to Achilles.

Inscriptions are also to be found, written in Greek and Latin, in praise of Achilles, and composed in different kinds of metric. Some are in praise of Patroclus, who is equally respected by Achilles’ worshipers.

Innumerable birds inhabit this island, sea-gulls, divers, and coots. These birds protect the temple of Achilles; in the morning, they take their ﬂight and wet their wings with sea water in order to fly back to the temple and sprinkle it and clean it with their wings.

The temple also served as an Oracle. Visitors would travel to the island bringing animals to sacrifice or set free in honor of Achilles. Even those who are compelled by stress of weather to land upon the island would pay to sacrifice one of the island’s animals. When presenting it to the Oracle, if the animal tried to escape it would mean that the offered price was too low and they’d increase their offer until the animal would stand still. A considerable treasure is laid up in the temple as a result to the offerings.

Achilles is said to have appeared in the sleep of his arriving worshippers and also of the sailors sailing near the coast of the island. Some of them saw dreams of Achilles pointing to them the right spot to anchor and others claimed to have seen Achilles standing in real on the mast, as the Dioscuri appeared on ships. The only difference is that the Dioscuri appeared anywhere in sea when the sailors needed protection, but Achilles only appeared to those approaching or sailing near his island. 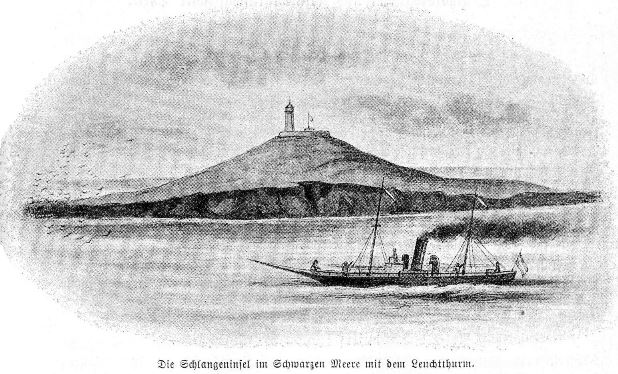 The Snake Island in Modern Times

In 1788, Fiodor Ushacov destroyed the Turkish Naval during the Russo–Turkish War near the shores of the island, which was called “Fidonisi” at the time, meaning Snake Island. Fifty years later, the historian N. Murzakevich visited the island and saw a lighthouse, but not a temple. Everything he had seen in Kritsikii’s notes and designs had disappeared. Another historian, Sergey Solovyov, had preceded him and collected anything he could find, in favor of The Archaeological Society of Odessa Ukraine, nowadays museum of the city.

In 2008 a branch of the Museum was established on Achilles’ Island, which is nowadays called Zmeinyi (Острів Зміїний), meaning Snake Island as well. You can see here its impressive collection of artifacts dating back to the 7th century. Most of them are objects related to rituals and derive from different workshops all over the world. The small village of 100 people is called Bile, meaning “white”, and provides only some elementary services.

Maybe the tomb has been lost forever. Maybe it is somewhere out there waiting for a new Schliemann who is going to reveal the truth behind the myth. No matter what is going to happen, Achilles is resting in peace inside the mind of anyone who has ever heard about him all over the world. Exactly as Agamemnon predicted when they met in the underworld:

“Not even in death did you lose your name, but you shall keep your noble fame forever among humanity”