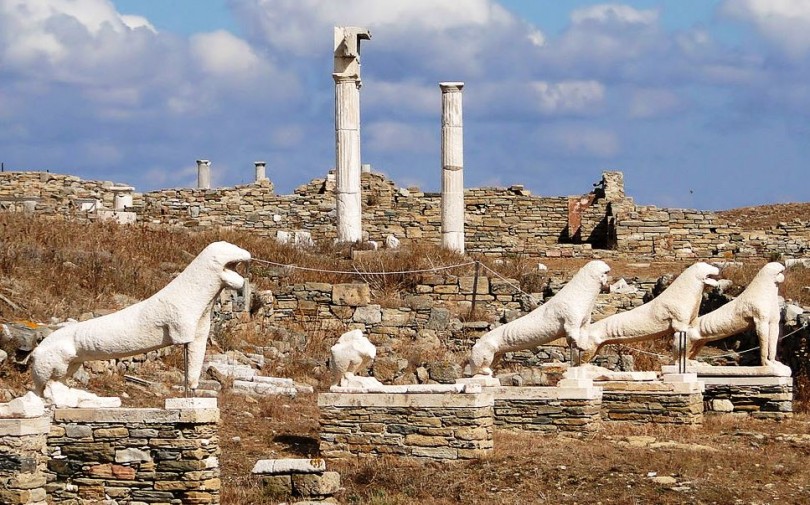 It’s not famous like Santorini, nor fertile like Crete. Nor is it full of life like Crete or Corfu and the myth says it was not even a regular island once upon a time. It was called the “Obscure Island”, the island that was not visible, because it was constantly floating here and there in the Aegean Sea. And it escaped this fate and gained its glorious name, only thanks to one of the many cheatings of the king of gods, Zeus.

Zeus fell in love with goddess Leto (Latin, Latona) and effect of that love was an eventful pregnancy and a painful labor that lasted nine days. When it was time for childbirth, Hera, Zeus’ wife, did all she could so that Leto wouldn’t find a place to give birth. Wherever she would go, she’d be cast off as everyone was terrified of Hera’s revenge. Then Zeus asked his brother, Poseidon, to grant him his floating island which was called Asteria and Ortygia. In return, Poseidon got Calabria (in southwest Italy). Poseidon positioned the floating rock in the middle of the Aegean Sea and fastened it with 4 diamond chains. And just like that, the “obscure” island became “Delos”, meaning “visible”, and all the islands in the circle around Delos were called Cyclades (from cyclos = circle. You can take a look at Cycladic art here http://www.ancient.eu/article/457/).

Since then, Delos is steady and has not moved again, except once. When Datis, Artaphernes’ admiral, was about to invade Greece not only didn’t he attack Delos, but as offering he burned 300 talents worth of frankincense! Then and only then, the whole island shook. All these stories about the floating island are based on its frequent earthquake tremors, Pausanias says. In his time, a part of the island was called “Shaky” (“tremon”).

And so, on this very island under a palm tree by the sacred lake, Leto gave birth to Artemis and Apollo after 9 days of labor sufferings. The moment Apollo was born, the place was filled with flowers and light, nature awoke and Leto made sure the island would become rich and respected by the whole world, as she had promised to do. And this is the story of how dry and barren Delos rose to its glory for millenniums to follow.

Delos’ surface area is just 3.43 km2 (1.32 sq mi) and its highest massif’s (Kynthos) height, is only 112 m (367 ft). There also is one single river with a length of just 1200m (0.7 mi) called Inopos. The Ancients said that it would flood in the same years as the river Nile, like if they were somehow connected with mysterious underwater currents.

Dryopes, Minoans and Cares were the inhabitants of the island since the prehistoric era.

At the time of the Trojan War, Delos was ruled by king Anius. His sons were Mykonos, Andros and Thasos, which means that the islands carrying these names had strong ties with Delos back then. Anius also had three daughters, Oeno (related to wine), Sito (related to crops, in English Spermo), and Elais (related to olives). The Achaeans took the three daughters with them on their way to Troy to make sure they’d have enough food. If we didn’t like myths so much, we could simply say that the Achaeans loaded their ships with lots of supplies from Delos. Even if this is what happened, it means that Delos was a rich center of trade. But we happen to like myths and we picture the three princesses of Delos teaching the soldiers outside of Troy how to produce food of crops, olives and grapes.

During the same time, Theseus made a stop at Delos on his way back from Crete. Grateful for having been rescued from the Labyrinth and the terrifying Minotaur, he gave offerings to god Apollo and started a dance circling the altar with the rescued seven Athenian youths and maidens. This dance was impressive and intense and its name: Geranos. This dance created the ancient expression “Bad altar of Delos” to describe someone who dances or strolls in this manner.

Here you can see the Zonaradikos dance of Thrace

And the Tsakonikos dance of Arcadia

Both dances simulate the Geranos dance.

From the 8th c BCE onwards, Delos is the congress center of the Ionian cities. The Ionians coming from the Aegean islands and the shores of Asia Minor would gather in Delos to discuss matters of importance and to take part in musical and gymnastic competitions dedicated to god Apollo. The conference was moved to Ephesus later on.

When the Athenians ruled

In the 6th century BCE Peisistratos, the tyrant of Athens, takes control of the island and carries out and unprecedented action: he commands all tombs to be dug and the remains to be transported to the nearby island, Rineia! The burial type and the grave goods found in the tombs prove that the ancestors of Delians were Cares.

Delos remained unscathed from Persian attacks because of its sacredness. Once the Persians were defeated, the Delian League (also Athenian League) was founded, under the leadership of Athens, and its meeting point was Delos. Moreover, the treasury of the League stood in Delos until 454 BCE when Pericles decided to move it to the Acropolis in Athens.

During the beginning of the Peloponnesian War, the Athenians, having suffered terrible losses cause of the plague, decide to purify the sacred island again. One more time, the tombs are emptied and the remains are transported to Rineia (earlier on called Artemitis and Keladousa). From that moment forward, no one was allowed to be born or die on the island and all parturient and moribund were moved to Rineia. This brought about a population boom of Rineia and the area developed impressively. The neighboring Mykonians would come to Rineia to raise horses, cattle, sheep and goats while many others from all around arrived on the island having identified the job opportunity of providing services to the families with newborns or to people who were patiently awaiting their last breath.

Additionally, the Athenians cast all Delians from their home island for having performed rituals while still being impure. Most of them fled to Adramyttium, only to be cast from there, too, a short while later by Tissaphernes. The Athenians then received the instruction from the Delphi Oracle to let all Delians go back to their island. They were called back and the quinquennial Delian Festival was established to honor Apollo.

The expedition of Alexander the Great and the resulting unification of West and East made Delos benefit greatly in financial terms. By now, Delos is an independent state.

Many buildings and works of art surviving today belong to that period. The cities were competing as to which would dedicate the most expensive and the most artful gifts to this sacred place.

During the whole period of the Roman Empire, Delos had yet another great time of economic development. Following the destruction of Corinth, Corinthean merchants moved to Delos, which was free of taxes and fees, and made great fortunes. All ships sailing from Italy and Greece to Asia would make a stop at the center of the Cyclades. Religious festivals were also a constant and perpetual source of wealth. The citizens of Delos were enjoying great luxury and this can be proven by the impressive mosaics still preserved in perfect condition today. Besides the sea related subjects, there are many Dionysian themes displaying the happy and joyful mood of the citizens. 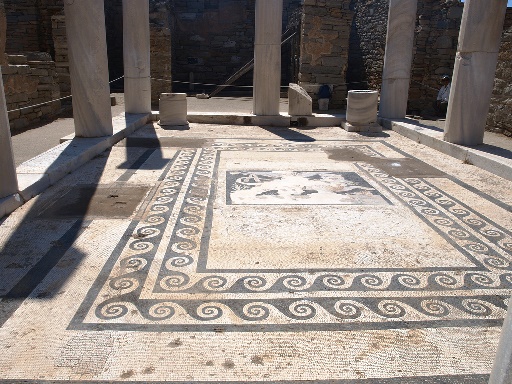 At that time, all deities co-existed in harmony. Serapis, Isis, Dionysus and many others along with the original hosts Apollo, Artemis and Leto.

Despite its great wealth and numerous population (around 30.000 during the Roman era), Delos had no walls and no army at all. It was easily conquered by king Mithridates of Pontus. His General, Menofanes, slaughtered the citizens and visitors of the island in 88 BCE, captured and enslaved all women and children. The treasures of the island were looted. Legend has it that one of the soldiers threw the statue of Apollo into the sea and it washed up at the shores at Boeotia. This spot was called Epidelion and the Boeotians of this area, Epidelians. I guess it is nowadays Dilesi. 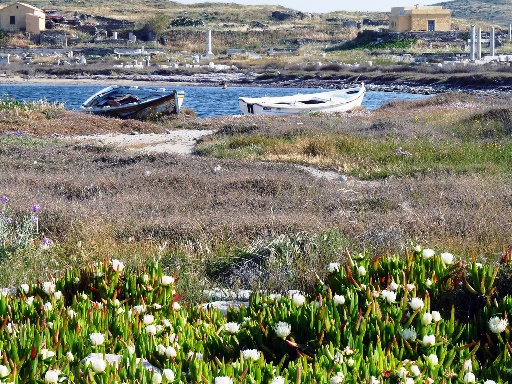 In 69 BCE, Mithridates tries to loot the island once more and sends his affiliate, pirate Athinodoros, to do the dirty job. The catastrophe of Delos was irreparable and permanent. By the end of the 2nd c CE, there’s only one small settlement left on the island. Christian author Tertullian can’t hide his contentment for the predicament of this sacred island: “Samos sand, and Delos disappeared”, he writes with great joy. Delos was completely abandoned in the 6th century BCE and remained just a refuge for pirates in the centuries to follow.

In a description of 1854 we read: «it’s completely abandoned, uninhabited and a joint for thieves and pirates… the animals you will see are armadillos, common quails, many woodcocks, vipers and lizards. There is also a vast amount of wreckage and the remains of once famous and glamorous buildings now cover the greatest part of the fertile soil, and so the island can’t be cultivated. There also are many preserved inscriptions, mostly on the pedestal of Apollo’s statue.”*

The French Archeological School started excavations in the 19th c and the world started rediscovering the beauties and treasures of Delos. Today, the whole island is an archeological site and part of UNESCO’s World Heritage Sites list.

Delos is one of the things you really have to see! You can easily visit it by boat from Mykonos or Naxos, but you can’t stay overnight.