Satisfaction, content, joy, delight… this is the purpose of anything we do in life. Think about it! Anything you seek in life is aiming to make you feel good. The Greek word containing every nuance of these words is “hedone” (meaning pleasure), although its meaning is mostly restricted to erotic pleasure in modern languages. But that’s no coincidence at all.
The myth you’re about to read describes how pleasure can be achieved. It doesn’t tell us about the temporary and easy to get pleasure, but aims for the long-lasting inner pleasure. This kind of pleasure can be born only when the soul (psyche) seeks Eros (love) at any cost. Eros for the body, for art, for science, for thinking. Eros for something that can uplift it. And this is a big, yet charming, adventure you will read about in a beautiful myth of the 2nd c CE.

Psyche was the youngest of a king’s three daughters and she was so beautiful that people living in her area started believing she were goddess Aphrodite herself. The worship of the goddess started fainting, her temples desolated and the statues were left unadorned. No longer would people go to Paphos, Knidos or Kythera to worship the goddess, but instead everyone was praying to Psyche. The goddess got furious and took on bringing things back to order. “I shall soon ensure that she rues the beauty which is not hers by rights!” the goddess said and asked her son, Eros the god of love, to make the girl fall in love with the most repulsive, unworthy and unlucky man there was.

Psyche already was very unhappy as she was feeling horribly alone. As everyone thought she were a goddess, she was treated like statues. They’d honor and respect her, but no one would dare asking for her hand. And so, while her sisters were happily married, she would fall into depression all alone in the palace.

Her father asked Apollo of Miletus for an oracle, and received the following answer: “O king, dress up your daughter for wedlock dread and take her up to the mountain to meet her husband. But don’t hope that your son-in-law will be of mortal stock, because she will marry a ferocious, barbaric snake-like beast. He can fly high with his wings and attack anything and anyone with arrows and torches. Even Zeus and all other gods show their terror for him. Rivers and dark realms below tremble.”

The prison of love

The whole city escorted the royal family on this terrible route to the mountain top. Wailing and anguish heard everywhere, while Psyche, adorned bride, waited trembling with fear for the strange groom. But suddenly, wind Zephyrus blew gently and carried her carefully to a beautiful garden. Among colorful flowers, green trees and flowing waters, a fabulous, divine palace emerged! Psyche was walking around in the palace astonished by the countless treasures when she suddenly heard a voice she didn’t know where it came from. “All of it is yours” the voice said and encouraged her to enjoy a bath or do anything else she’d like.

When night fell, Psyche lay down in the beautiful bedroom the girls at her service had prepared for her. And then in complete darkness, the groom entered the room and made her his. But he left before daybreak and she did not get to see his face. The same thing happened every night for a long time and Psyche felt great every time she felt him close and heard his voice.

One day after a long while, her sisters heard that their sister might have died and they took off to find her. Psyche’s husband warned that if her sisters would arrive, she would have to completely ignore anything they would have to tell her. “Otherwise, you will bring unspeakable misfortunes upon me and yourself”. Psyche promised to follow his advice, yet still she could not help but feeling sad knowing that her family will be grieving for her and that there was nothing she could do to comfort them. She persuaded her husband to let her see her sisters to let them know she is doing well and give them beautiful jewelry as present, and repeated she would not let anything change the status of this marriage. “I’d rather die a hundred times than lose the supreme joy of our marriage. For I love and adore you – whoever you are – like my life, and I esteem you more than god Eros himself”, she said affectionately.

When the soul succumbs to fear

Then, he sent Zephyrus once more to the mountain top to find Psyche’s sisters who were breaking down and crying out loudly searching for their sister. And so did Zephyrus and carried the sisters to her. Psyche was overjoyed! She consoled her sisters and showed them around the marvelous palace and took good care of them. And when they asked about her husband, she made up a story to avoid the truth. “He is a wealthy, good looking young man who likes hunting and that’s why he is away most of the day”, she said and gave them countless presents of gold and precious gem. And the sisters got really envious for their sister’s good luck. They came back to visit her once more when she got pregnant and they tried out all kinds of tricks trying to find out more about the husband. Psyche had forgotten her made-up story and this time she told them that her husband was a middle-aged merchant. The sisters realized she had never seen his face and suspected that he is a god and the child to be born would be a god, too. 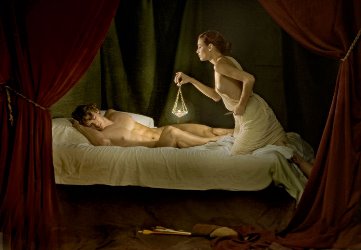 During their third visit, the sisters convinced Psyche that her husband is in fact a terrible monster who would kill her right after childbirth. She got so terrified that she got convinced she should kill him. At night, when her husband fell asleep, Psyche approached holding an oil-lamp in one hand and a sharp blade in the other. But as she was coming closer, she saw his face for the first time and realized she had married the most beautiful and loveable of all gods! It was Aphrodite’s son, Eros himself! Still standing all amazed by the bed and staring at the beautiful young man, she saw his quiver and arrows nearby. She took an arrow and as she was contemplating it in admiration, the sharp head pierced her hand. And then the poor girl lost her mind completely! She fell in love with Eros passionately! Agitated as she was, she tipped the lamp and a drop of hot oil spilled on his shoulder. Eros woke up, got mad that she hadn’t trusted him and disappeared.

Psyche went from town to town searching for him desperately, while in Aphrodite’s kingdom Eros was fighting to stay alive. His burn wound had begun to fester causing him enormous pain. A servant told his mother all that had happened and she got furious, imprisoning Eros in the room and handing Psyche over to her two maids, Melancholy and Sorrow, to punish her. Worn out by all the tortures, Psyche now has to face Aphrodite who imposes a number of humiliating and wicked trials on her!

But the whole of nature helps her perform the trials. Ants helped her arrange the different kinds of seed from an enormous pile of mixed seeds. A reed showed her how to take a tuft of the golden fleece from some wild sheep with deadly bite. Zeus’ sacred eagle brought water from the sacred Styx, a spring no mortal could ever come close to.

“Now I know that you are a witch” said enraged Aphrodite when Psyche came back, “because no mortal can perform these tasks”. And then she thought of something even more difficult. Psyche would have to go to the Underworld and ask Persephone for some of her godly cosmetics. Aphrodite gave Psyche a box and said: “Tell Persephone that Aphrodite wants a small supply of her cosmetics because she has used hers all up, rubbing it on her son’s wound”. But who had ever gone to the Underworld and come back alive? That was simply impossible! Exhausted Psyche made for a very high tower determined to throw herself headlong from it and get to the Underworld once and for all! But then, the tower spoke. It gave detailed instructions how to get to Hades and reach Persephone avoiding all the traps. It also warned her to not open the box in any case. 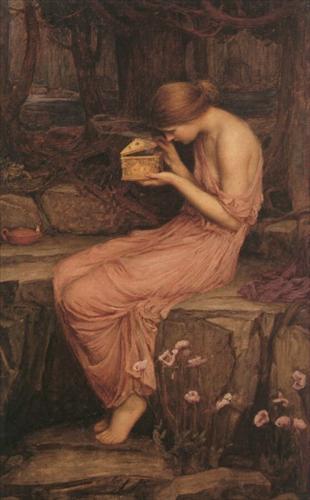 Psyche made it and came back just fine, but as soon as she saw the light of the world of the living, she focused on the box. “Why shouldn’t I take just one drop of the cosmetics the goddesses use, to become pretty for my beloved?” she asked herself and opened the box. But there were no cosmetics in the box; just the breath of Death.  Psyche collapsed unconscious and life was leaving her body bit-by-bit. And she would have died, if Eros hadn’t recovered in the meantime.

…and pleasure is born

The winged god could not stand another moment apart from his beloved. As a soon as he got better, he took off to go meet with the king of gods, Zeus, and asked him for help. Zeus summoned all gods and told them they should help the young god, forgiving his mischiefs which had troubled all of them in the past. He sent Hermes to bring Psyche, and for the marriage to be among equals, he gave her ambrosia, the food of the gods. A few months later, a little girl was born and they named her: Hedone.

Both being immortals now, Eros and Psyche lived together forever, loving each other passionately.

(This story is a variation of a mythical theme to be found in almost all ancient civilizations. It was written by Platonist Apuleius in the 2nd c CE.
You can read the full text here
Apuleius, The Golden Ass – Latin Epic 2nd A.D.
http://www.theoi.com/Ouranios/Psykhe.html )
Photos sources:
http://www.louvre.fr
http://www.johnwilliamwaterhouse.com
http://contemplatingtruth.wordpress.com