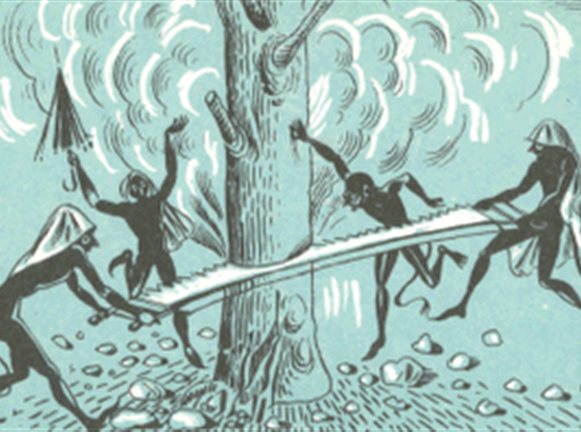 Imagine you live in a Greek village around the 19th or early 20th century, a few days before Christmas. How would it be like?

Well, this is the time for you and your family to have some fun, but it’s nothing like you and I experience today. Back then, you would have to take some measures, so that you and your beloved ones make it through the “Dodekahemera”, the twelve days between Christmas Eve and the day of Epiphany, January 6th.  For these days, you need protection from the kallikantzaroi (singular kallikantzaros). 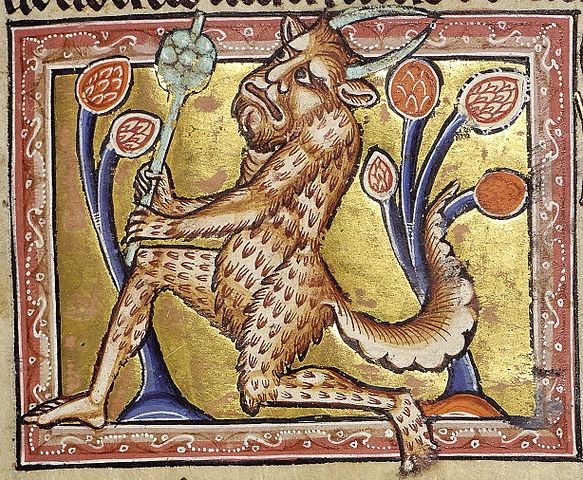 We have no idea about their first appearance. There is a chance that they are descendants of the ancient “Kobaloi”, the companions of god Dionysus in ancient Greece. Unfortunately, we don’t have much information about these mischievous and tricksy beings. We know that once they annoyed the great hero Heracles and he captured them. But he found them so cute that he decided to let them go. So, they continued to walk around humans and cause troubles. By the time of the famous comedian Aristophanes, “kobalos” had become a synonym of  “knave”, “caricature” and “vulgar”. This is all we know about them, thanks to Aristophanes and a few medieval books. Well, those creatures could be the ancestors of kallikantzaroi.

According to the lore of Greece of 19th and early 20th century, the kallikantzaroi were considered cute and amusing, despite their ugly looks. They are pictured as hairy human-like beings, with goat or ass legs, ape tail and a thin, long human face. They are demons, habitants of the underworld assigned to a laborious and pointless task: they are forever trying to cut off the big tree that holds the earth. They keep doing this every day, but every Christmas the need to take a break and have some fun among the humans. Thank God, until they return to their job the tree has been healed, so they need to make a fresh start until next Christmas, and that’s why the earth is still in place. Their story seems like a new version of the Sisyphus’ punishment. Likewise, he was condemned to roll a massive boulder up a mound, only to watch it roll back to hit him, repeating this action forever.

Nevertheless, some humans became kallikantzaroi, but only for these twelve days. The story is that they were born during that period or especially on Christmas day and those kids were transformed every year. This lore was very common in Crete and Rhodes, where people used to narrate horrible stories about the attacks of those transformed individuals. Some of their victims lost their voice, others passed out and the unlucky ones passed away.

An interesting thing about kallikantzaroi is that their wives are human females whom they manage to seduce. As for their children, they only appreciate the males. Each time the midwife presented a boy to the father, he offered to her a basket full of gold coins. Had she brought to him a girl, she ended up in a basket full of ashes!

What do they want from us?

As I told you before, first of all they want to have some fun. Sometimes, they were just dancing in the moonlight with Fairies or the seduced women, just like the ancient satyrs with the Nymphs did. You could always meet some elder insisting that he had seen them partying in the woods. When they didn’t feel like dancing, they would wait near the springs where the young women went to fill their buckets. Often they visited some mill and forced the miller to make them some pies. If he refused, they would bring the whole place down.  They defiled the flour and scattered it all over the place.

Depending on local tradition, families run through some rituals and used tricks to protect their homes as well as themselves.

After Christmas Eve’s mass, they draw, using coal, the sign of the cross on the doors and windows, and on every vessel full of food or water. They put a sieve on the doorstep, in order to keep the goblins busy. The legend has it that the kallikantzaroi are always willing to count its holes. Unable as they are to count beyond two, they are standing there all night counting “one, two” again and again, leaving the people alone. Before sunrise, as the rooster crows they have to flee anyway. If the household owns a black rooster, the kallikantzaroi won’t approach in the first place.

In Western Greece, the kallikantzaroi (most commonly known as “pagana”) were depicted holding an awl long like a spear. Through the chimney they steal the food brewing in the fireplace. So, the housewives used to leave a plate of fried cakes with honey in the fireplace to appease them. This custom was common in Cyprus, as well.

According to a similar lore of Cyclades islands, these Christmas-goblins tried to get in the house through a hole in the wall, above the cooking stove in the kitchen. When a kallivrousis (this is how they called the kallikantzaros) attempted to gain entrance, he stood in the roof near the hole and shouted “Hey you, old man, the lard is burning”. Now the man of the house should not put out the fire, because then, the kallivrousis would sweep in. So the man answers “Let it burn, my son”. The fire should not be extinguished until the end of the holidays. The surnames Kallivrousis in Andros and Kallivourtsis in Naxos are remains of this tradition.

Another place that should be protected was the storage room, on the ground floor or in the basement. If the goblins found the place messy, they would finish it off, defiling the food and ripping the clothes to pieces while cursing the household. If they found it clean and tidy, they would leave wishing “a thousand goods”, meaning everything that brings prosperity and happiness. To avoid such a disaster, housewives took very good care of the storage rooms before Christmas.

In general, it was not safe to roam through the streets after sunset and if they had to go out, they always carried a lit torch. They avoided leaving eatable goods exposed; they didn’t stroll around dark places, especially near water sources and rivers. However, if somebody came across a kallikanzaros, they should remain silent and rush to find a place with other humans. Then, they’d say “woods, logs, torches burning”. Hearing that, the kallikantzaroi run away, for they know that all humans will now come with lit torches. This saying (which sounds in Greek as meaningless as it sounds in English) became an expression that was used when someone talked nonsense.

The kallikantzaroi have to go when the day of Epiphany arrives, and we celebrate the day that Christ was baptized. We call this day “Ta Phota” meaning “the lights” and “Theophany”. In the morning, the sanctification of the water takes place, a ritual that imitates the baptism and symbolizes the purification of our world. The priest makes rounds to the homesteads and sprinkles holy water upon the people and all over the place. Now, the kallikantzaroi flee singing their last song:

“Fly, let us fly away! For here comes the fat priest

with his holy water and his crook

and he will sprinkle us, and so, defile us.”

The kallikantzaroi survived through the centuries despite their paganist origin. Among Christians, they just acquired some characteristics of a new enemy, the Devil: a mix of the ancient god of nature Pan, the satyrs and some other medieval imaginary creatures.

Even in ancient times, not everyone believed them to be true. However, they took the opportunity to share some precious time with the family telling horrifying or funny stories by the fireplace, the ancient “Hestia”, the source of light and warmth. Telling their stories was another way to cast away the fear of life’s dark side and wishing for a new year full of light.

Nowadays, we use to celebrate by the lights of our glittering Christmas tree, but we don’t tell any stories. Anyway, if you happen to hear some strange noises while preparing the Christmas feast, make sure that your belongings are safe in place.

And, just in case, keep the fireplace going until the day of the Lights!