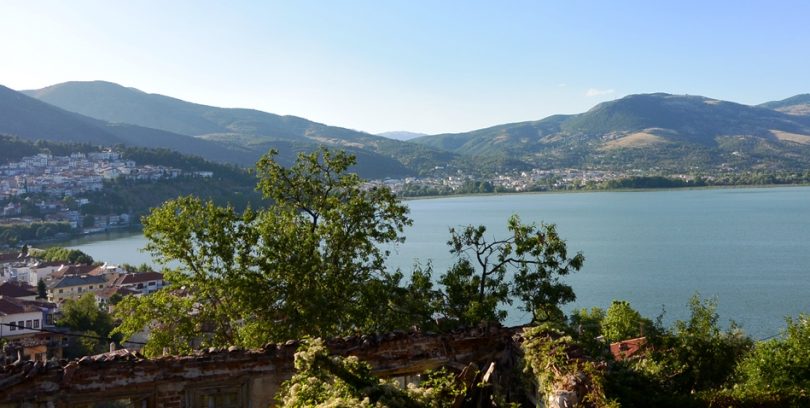 We’ve recently visited Kastoria, maybe the most impressive city of Western Macedonia, and it simply charmed us! The calmness of the lake, the beautiful natural scenery with its dewy greenery, the appeal of byzantine architecture, local food and finally the hospitality and genuine warm welcome of the locals make you want to stay in Kastoria forever. 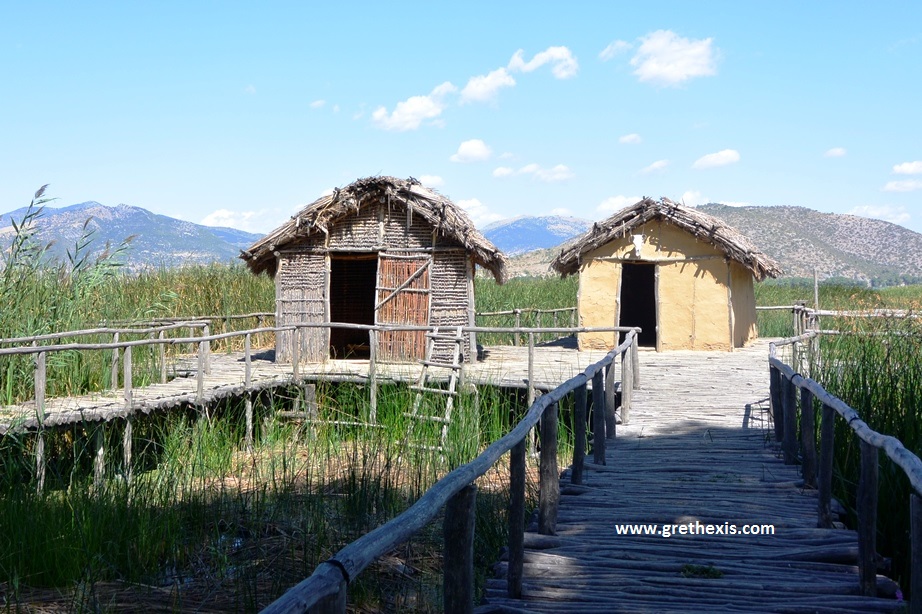 If you’d like to see how prehistoric people lived 7500 years ago, take some time to visit the Neolithic lakeshore settlement of Dispilio, one of the oldest in Europe. Its 5000 dwellers cultivated wheat, hunted deer, and raised lambs and kids, cattle, and pigs. 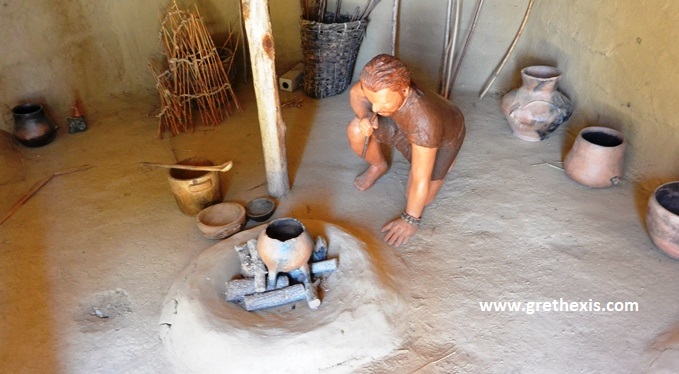 In the nearby erect recreation of the settlement, you will get the chance to see huts made of reed and clay and you can even step inside the houses and get the feel of these detailed reconstructions with everyday items found during the archeological excavations: food remains, ceramics, weapons, animal bones, tools, even prehistoric shelves! 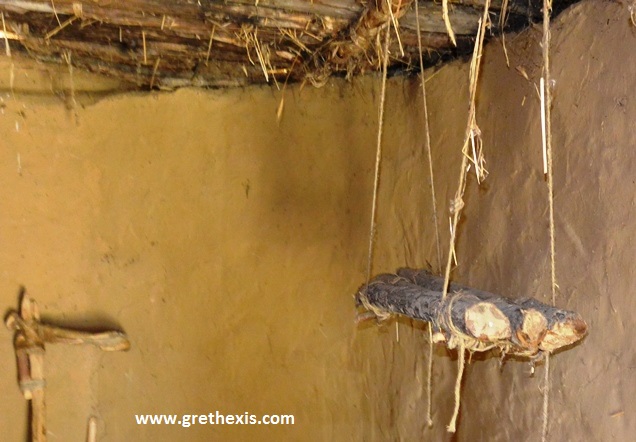 You will be impressed by the wooden Dispilio Tablet, on which you can see a primeval writing attempt from 5260 BCE, and musical instruments among the oldest of Europe: flutes made from bird bone! It’s a beautiful representation of the settlement and the whole setting is well taken care of. 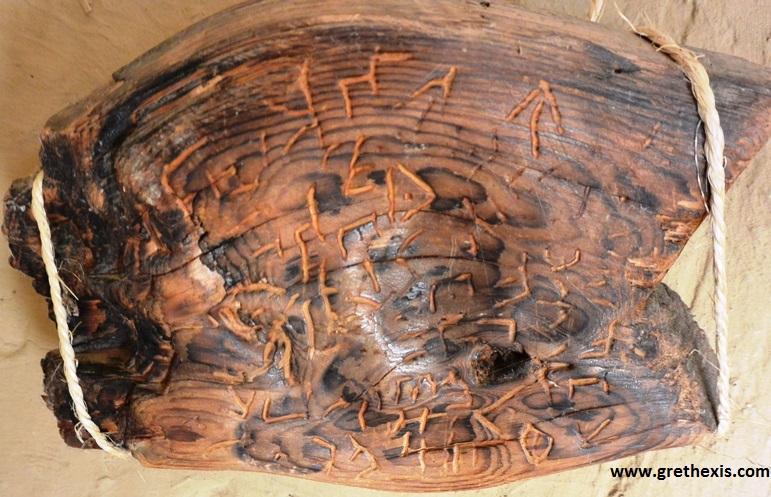 Traces of an age-old sanctuary of Zeus and Hera and burials from the Iron Age have been discovered on Mount Vigla (Psalida). The excavations revealed jewellery, ceramic devotional statuettes and relief paintings depicting the honored gods, as well as Hermes.

Roman historian Titus Livius (also known as Livy) reports in his book “The Second Macedonian War” that the city had been called Keletron since the 5th c BCE. This city was completely destroyed by the invading Goths and there are only very little remains left from that time, like a pillar found near the Kurshum-Jami.

The modern name “Kastoria” is first to be found in the 6th c CE and was referring to the lake. Emperor Justinian then named the city after the lake. The lake itself was called “Kastoria” because of the many beavers (Kastoras in Greek) whose fur was an important source of income for the locals. Leather processing in Kastoria began in the 13th c and three centuries later there is a leather products export boom. The citizens of Kastoria were famous for their skills in leather processing and many of them became wealthy. But this stopped abruptly during the 80’s because of the anti-fur movement. Compared to previous decades, nowadays there are only a few, yet numerous, furriers left and they have adjusted their production to modern standards for the protection of the ecosystem. 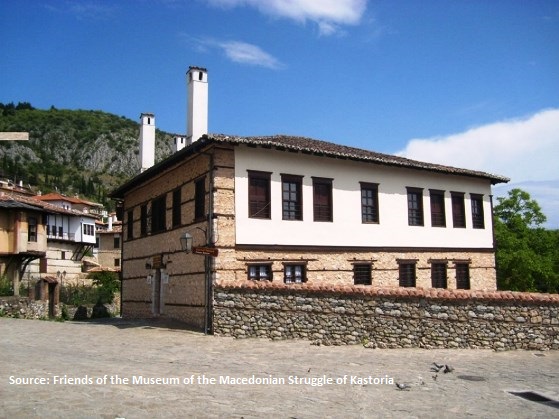 In the village Melas (previously called Statista) you can visit the house where the Greek fighter Pavlos Melas was killed by an Ottoman posse in 1904. The house belonged to teacher and priest Hadji Ioannis Kantzakis, who offered shelter for Melas and his comrades. Unfortunately, the Ottoman forces managed to find out about the hiding place and Melas was killed in the barn of this house. The interior of the house is kept furnished and decorated exactly as it was in 1904 and you will also see weapons, uniforms and photos of the Greek fighters of the Macedonian Struggle. This museum, too, can be visited for free upon appointment (24670 84554).

You might also be interested in visiting the mansion of Neratzis-Aivazis where the Folklore Museum is housed in Doltso. The exquisite fresco depicting Constantinople is the highlight (24670 28603).

Moreover, there are dozens of traditional old mansions worth seeing. Take a walk in the small streets of these neighborhoods and take a look at these beautiful houses; it’s like a glimpse into the past. Most houses we saw also had a sign with the family name of the original owners. 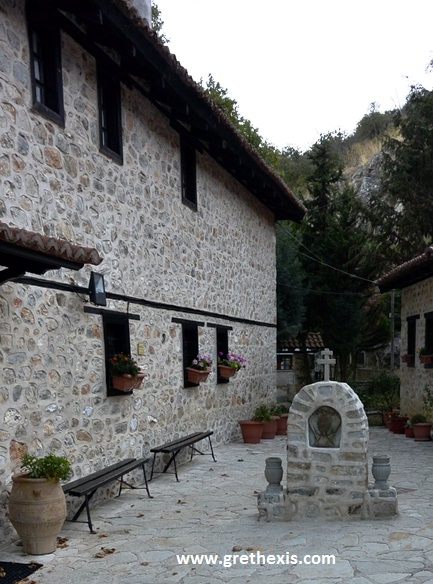 In Kastoria there are 75 temples built between the 9th and 19th century, giving the visitor the opportunity to observe the development of religious architecture and frescoes through the centuries.

The Orthodox Monastery Panagia Mauriotissa was built in 1082 by emperor Alexios I Komnenos; later constructions to the compound added the building that currently houses the Museum, and the chapel of Ioannis Theologos. Even though partly damaged, the decoration of the church is still impressive. The monastery is located in the east part of the Hersonissos (peninsula).

Cave of the Dragon 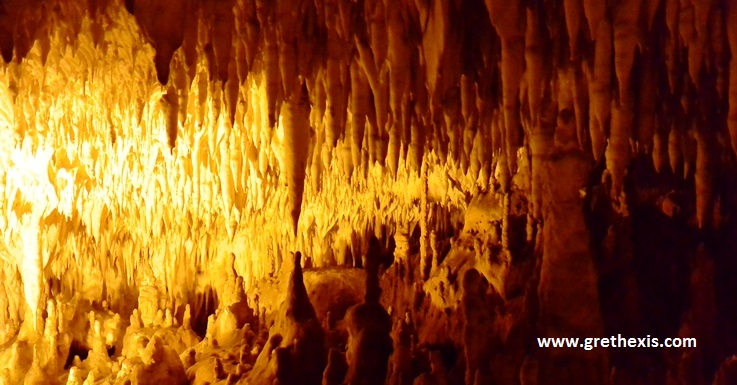 In the south-east part of the city, just 20 meters from the lakeshore, you’ll find the entrance to the cave of the Dragon; a one-of-a-kind cave as it is the only known cave at the shores of a lake.

Legend has it that a dragon guarded the entrance of the cave and all the gold inside. The first king of Kastoria, Kastor, sent a young man with the mission to kill the dragon. Kastor wanted to show off  the gold to his brother Polydeukes and to his father-in-law Keli, who was a priest of god Panas. The young man killed the dragon and threw his dead body into the water of the cave.

Kastor thanked Panas and proudly went into the cave followed by his family. They reached a tunnel of almost no oxygen and their torches went out. Then a voice was heard speaking to them: “He who will take a handful of mud from beneath his feet, will regret it, and he who won’t, will regret it, too”. The most daring ones got on their knees and picked up some mud. When they all got back outside into the light, they found out it was gold dust they were holding.  The cave was found by discoverers from Kastoria in the 40’s, its systematic exploration began in the 60’s and the cave finally opened its door for the public in 2009. The 300 meters long accessible route will take your breath away! (www.spilaiodrakoukast.gr) 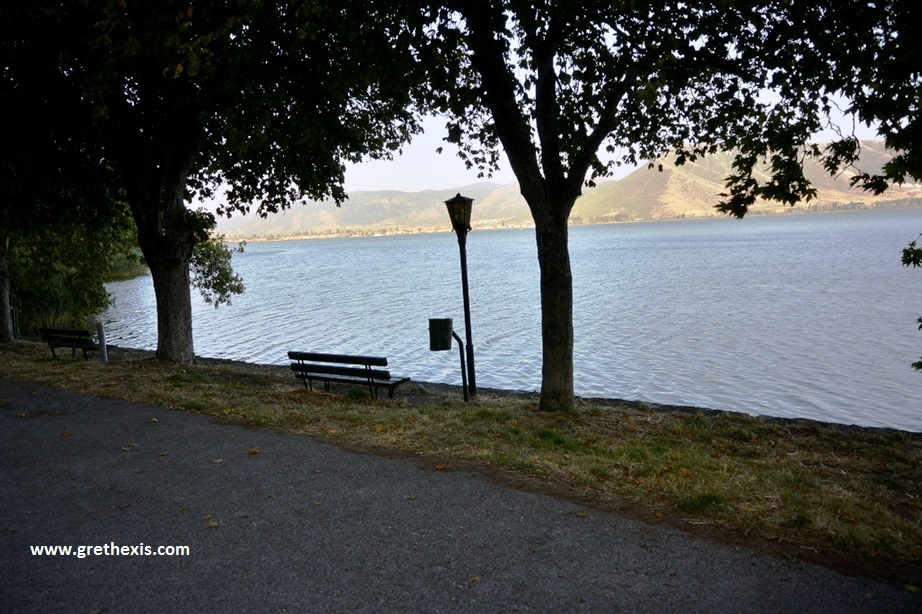 The beautiful lake Kastoria, or Orestiada, totally deserves its place in the “List of Special Places of Scenic Beauty”. You can see the lake from almost any point of the city and the view is astonishing. But the walk on the lakeshore road is what will truly enchant you! On the one hand the rich greenery and on the other hand the peacefulness of the lake will make you forget you’re in the city. The walk between the poplar, beech and plane trees enriched with the “chatter” of birds as they’re playing with water, will give you an unforgettable experience! 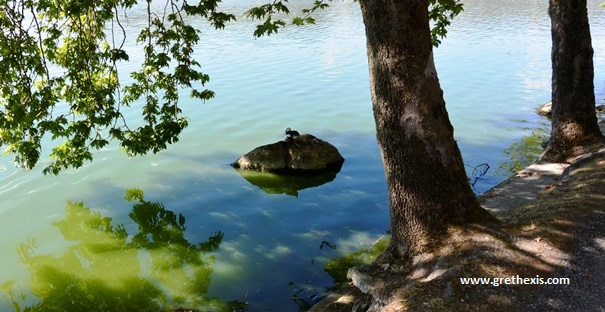 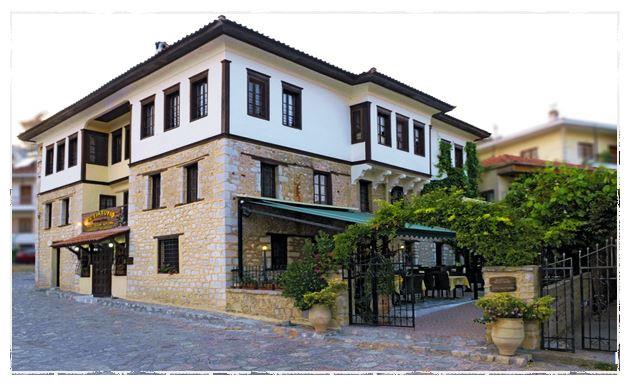 We had lunch at the Doltso Restaurant (www.ntoltso.gr), located in the square of the traditional neighborhood Doltso. The interior and exterior have been decorated with great taste, blending with the surrounding harmonically. Traditional dishes, with fresh seasonal ingredients. The dining area is relaxing and hospitable, all tables have plenty of room and the service is very good and friendly. We recommend Pork Hock, pork or boar with plums and raisins, sarma (stuffed cabbage roll) and sundried tomato rissoles. 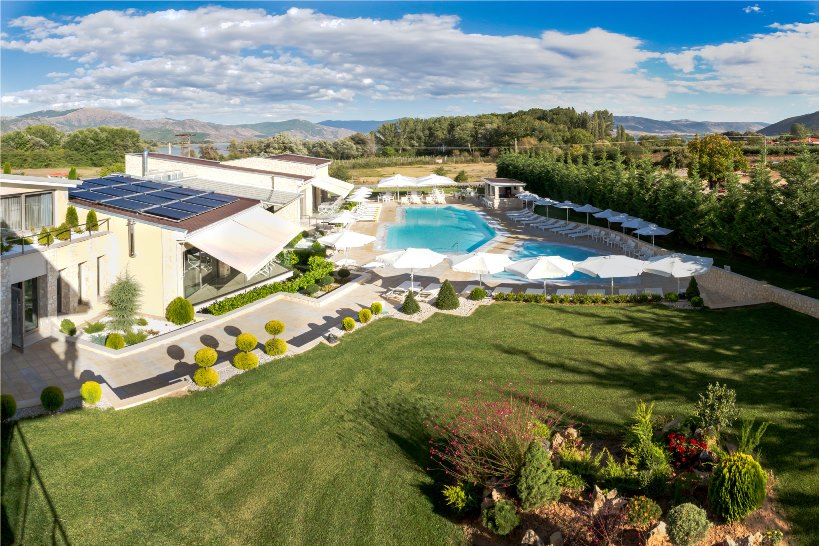 Calma Hotel & Spa**** (www.calmahotel.com). There’s nothing you won’t like about this hotel! Simple, modern décor with luxurious feel in its every detail. Sunny, comfortable and spotlessly clean rooms, excellent service, and a rich homemade breakfast buffet. It’s only 3km outside the city, surrounded by a natural and quiet environment. The room rates are also very reasonable, given its category and amenities. Your stay at the hotel will be unforgettable!

If you’d like to buy local food products, we recommend butter beans, called “gigantes”(=giants) or “elephants”, lentils, chickpea, delicious sheep and goat cheese varieties of Kastoria, pasta and liqueur made of walnut and cranberry. Don’t forget to look for the amazing local wild mushrooms which are well-known for their purity and great aroma. Look for the local farmers here www.agrodata.gr , or you can also buy online here www.amaltheia-kast.gr .

Last but not least, don’t forget that the furriers of Kastoria are among, if not, the best in Europe. If you like fur or leather products, you’ll find a variety of clothes to choose from, but you can also get yourself warm fur rugs to keep your home warm in the winter.