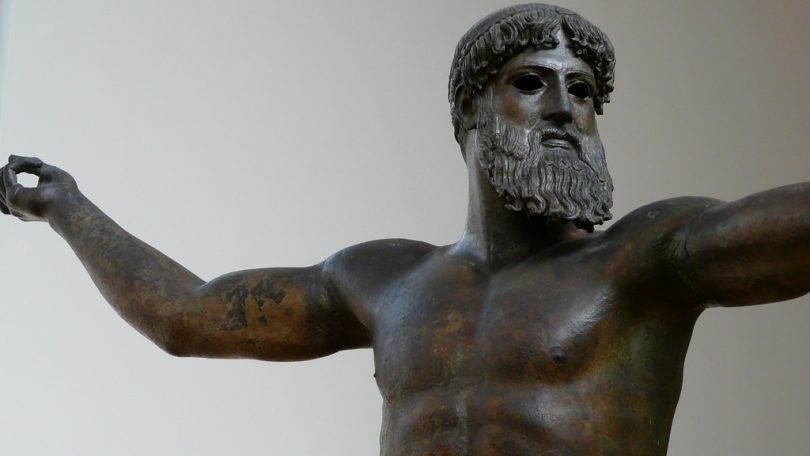 Poseidon (Neptune for the Romans) was the son of Cronus and Rhea and one of Zeus’ brothers. The oldest form of the name was Poteidaon (from “potei das” = earth’s husband or lord of the waters). Initially, his worship was connected with horses and earthquakes, but this aspect declined as Greek civilization focused on marine activities.

Poseidon became the god of sea and the defender of sailors after Cronus was overthrown. The world then was distributed from scratch between Zeus (air), Hades (underworld) and Poseidon (waters). In fact, Poseidon changed his business by the time ships became more important than horses.

On the signs of the earliest attested language form of Greek (Linear B) the name Poseidon appears more often than Zeus. He is called “Poseidon – Anax”, meaning Poseidon – King. In Knossos and Pylos of that era, he was a chthonian deity, the king of the underworld along with his wife Amphitrite, who was sometimes identified with Demeter.

No wonder Poseidon was often worshiped along with Demeter and Persephone. Naturally, later on, Persephone becomes the wife of Hades (Pluto), who is the next god of the Underworld.

Poseidon was the father of Triton and Benthesikyme by his wife Amphitrite, daughter of Nereus. Rhodes and the Sibylla Herophile were his offspring by Aphrodite (Venus). Despina (=the mistress), goddess of the Arcadian mysteries, and Arion (the horse with human voice) were his children by Demeter. Pegasus, son of Medusa and Cyclops Polyphemus who blinded Odysseus, was as well one of Poseidon’s many other children. Poseidon is also the father of the ten rulers of Atlantis and the dominant god of the lost continent. 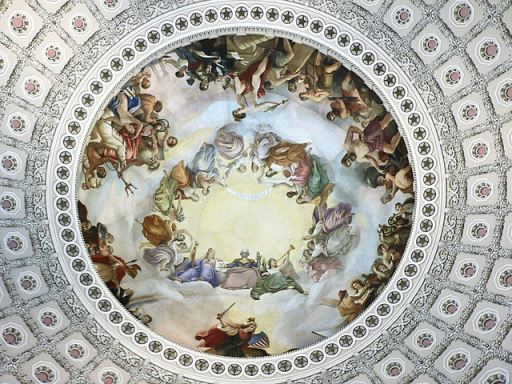 Poseidon is the dominant deity on Mount Helicon in Boeotia and at Aigai Euboea, where one of his most impressive temples stood. According to Homer, he was the central deity in Aigeira Achaia, where his palace was located.

Another temple dedicated to Poseidon stood in Isthmia, Corinth. Every two years (mid-summer) were held the homonymous celebrations in his honor. Venue of the games was the sacred forest of the region, famous for its fir – trees. Originally the games were athletic contests, but later they included horse racing, music and poetry contests. The prize was a branch of elderberries (sambucus) at first and of palm fir later on.

A beautiful temple of Poseidon is located in a city named after him, Poseidonia. The city was an Achaean colony in Magna Graecia and is now called Paestum (85 km. SE of Naples).

Poseidon failed in the contest against Athena to become the patron-god of a city, later called, Athens. He struck the rock of Acropolis and offered the Athenians flowing water, which proved to be undrinkable. Athena won the competition offering the olive tree, a rich source of food and timber. Nevertheless, Poseidon’s worship would not decline. He was widely honored by the Athenians; he even shared the Erechtheion Temple in Acropolis with the goddess Athena.

The Athenians celebrated both gods in Skirophoria. The annual festival took place on the 12th day of the last month according to the Attic calendar (May – June). This celebration of the dissolution of the year involved fertility rites and offers to the honored gods. Pies and objects made of white flour and plaster were offered to Athena, Poseidon as Erechtheus, Demeter and Persephone. The award for the athletic competition was a special drink of wine, honey, cheese, grainy flour and olive oil. This they used for libations.

Exclusively dedicated to Poseidon was the month named after him. Poseideon (December to January) was the main month of winter. The Haloa festival was held on the 26th of this month in Athens and Eleusis in honor of Poseidon, Demeter, Persephone and Dionysus. The name derived from the word “halos” (threshing floor or cultivated field). This time Poseidon is worshiped as the god of vegetation and fertility. During the festivities the women provoked the forces of fertility with obscene words and gestures holding replicas of male and female genitalia. The celebration ended with a banquet consisted of agricultural products and plenty of wine. 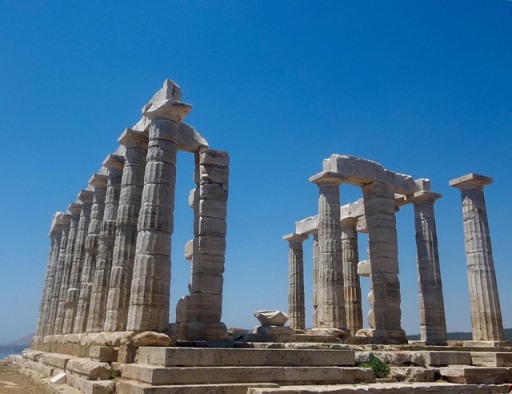 The most famous temple of Poseidon stands at Sounion, Attica. Herodotus tells us that the first temple was built there by the 8th century BCE. This temple was destroyed by Xerxes during the Persian wars. And the Greeks rebuilt it soon after the war ended using white marble. Inside that temple stood the massive, bronze statue of the god, six meter high, covered with gold leaves. He held the trident in his hand, the weapon with which he caused storms by upsetting the sea or piercing the earth for water to spring.

In 399 CE the temple was completely destroyed by Emperor Arcadius and left in ruins. However, it still is an astonishing site to visit and the reconstructed temple stands proudly for all to see. Objects once offered to the temple were found during the excavations of 1906 and are now exhibited in the Archaeological Museum of Athens.

Another outstanding temple of Poseidon stood in Cape Tainaron, the southernmost point of mainland Greece. Back then they called that place Poseidion, after the god. The temple was a Necromanteion (Death Oracle) and the nearby cave was considered to be a Psychopompeion, namely the entrance to the underworld. Today, you can see there a Christian church built with the materials of the ancient temple.

Once you choose Poseidon as your favored god, make sure you know everything about Odysseus. Read Homer’s Odyssey and get familiar with the hero who dared to confront Poseidon’s wrath. Visualize his realm in the depths of sea and feel the salty water cleansing any toxic emotion that troubles you. The Orphic Hymn n.17 will help you concentrate and feel the freedom of this mental journey on the foaming waves of the sea. This is the right time for planning new travels or even setting off an entirely new beginning in your life.

His ancient worshipers depicted Poseidon driving a chariot, which was pulled by seahorses or horses galloping on the sea. His palace in the ocean depths was made of coral and gems and his beloved companions were dolphins. Decorate your place with sea motifs and anything related to sea life, horses and running water. Colors like dark blue and azure combined with white, will create an attractive, poseidonish environment. Trident is the god’s main symbol.

And don’t forget to read the dialogue Timaeus with the wonderful narration about Poseidon’s land, Atlantis. You’ll be amazed by the story of its people and their advanced civilization which disappeared forever in the depths of the ocean.