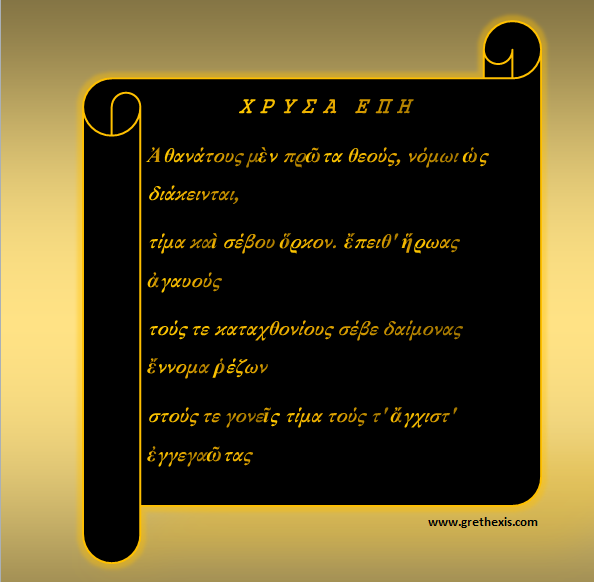 A great philosopher, mathematician, a Master of religion and politics bestowed on us some words made of gold; The “Golden Verses”.

Pythagoras was born in Samos in 580 BCE and started showing a love for learning even in his early years. Luckily for him, and us, his father Mnesarchus used to take him along on his travels to the East and the West and so, young Pythagoras was given the chance to develop a broaden perception of the world very early in his life. His father also made sure his son would get the best education from the mystics of the East and from the well-known philosopher Pherecydes from Syros.

Even if you don’t know much about Pythagoras, you’ve surely heard about the famous Pythagorean Theorem. Pythagoras was a pioneer in mathematics and geometry, an excellent theorist of music, a philosopher with a unique religious-like world theory and when he moved to Crotone of Magna Grecia, Italy, he also revealed his talent in politics.

Here we will deal with the philosopher Pythagoras and his teachings on the virtues that must be pursued by each man in order to be pure and ready for a better incarnation. It is a passage from the “Golden Verses of Pythagoras”, a text with key points of the teachings of Pythagoras, written by the Pythagoreans of the 5th century BCE, many decades after the death of the great master.

To make reading a bit easier, we have split the excerpt into 10 points.

With zeal and industry study and work on these, crave for these.

“He said it”, as his students would say out of respect for their master and in awe of the validity of his authority and ability. But we don’t know him good enough to trust him that light-hearted. So let’s trust life itself by continuously considering whether our daily problems could be caused by our negligence to dodge the things “He” had identified as the sources of our unhappiness. If you find it difficult to undergo this consideration and questioning of yourself, I suggest you start with bullet no. 10. This will help you get your thoughts (and later on, your actions) in order and it will help you go through all of the points much easier.

If Pythagoras is right, this process will advance your soul and prepare it for a better incarnation. In any case it will help you to better know yourself and gain the self-confidence and endurance required to start building an admirable personality!