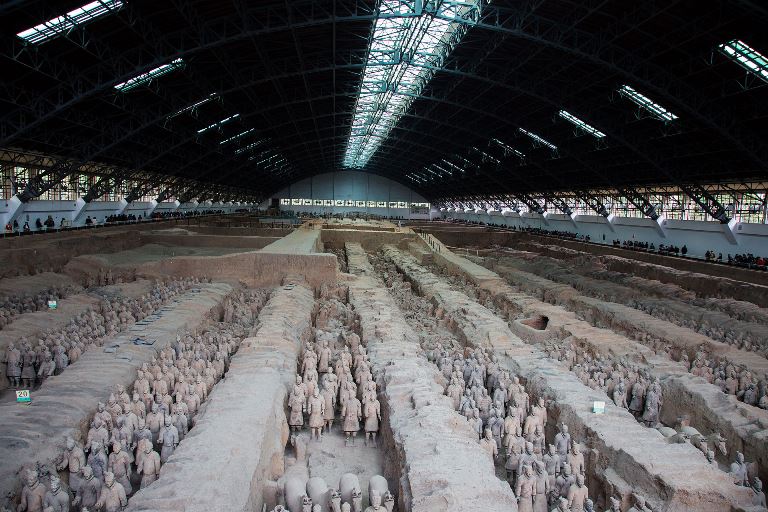 Finally, all evidence points to early contact between Greece and China! Are you one of us who had been taught that the first contact between China and the West was when Marco Polo arrived in China? Wrong. Newest research shows that China was well aware of Greek art 1500 years earlier.

Lukas Nickel, a reader with the School of Oriental and African Studies at the University of London, had stated, back in 2013, that “It is perfectly possible and actually likely that the sculptures of the First Emperor are the result of early contact between Greece and China“. He was talking about the 8000 Terracotta Warriors discovered in 1974, less than a mile to the northeast of the mausoleum of the First Emperor of China, Qin Shi Huangdi, and the statues of acrobats, dancers and officials found nearby. The archaeologists currently leading the newest researches believe that we have enough evidence indicating that ancient China had been inspired by Greek culture.

Qin Shi Huang initially was the King of Xi’an and is mostly known for unifying all of China and becoming the First Emperor of China in 221 BCE. Qin Shi Huang commissioned the 8000 warriors statues and depictions of chariots and horses. There is no other life-sized statue in Chinese art before, or after, his time. Nickel believed these extraordinary statues to be proof of Greek culture and art having influenced the king who had come in contact with the Greek kingdoms of Asia, following Alexander the Great’s campaign. Nickel translated ancient Chinese records that tell a tale of 12 giant statues, clad in “foreign robes” that “appeared” in Lintao in what was the westernmost part of China. Furthermore, the king is mentioned in these texts for having disrespected his country but letting foreign influences in.

Evidence of Greek, and generally speaking Western, presence is piling up in latest researches. Separate studies show European DNA samples and remains of body parts have been found in the huge tomb, suggesting that Westerners may have settled in China before and during the reign of Qin Shi Huang. Read more about Nickel’s findings and latest developments on Live Science and BBC.