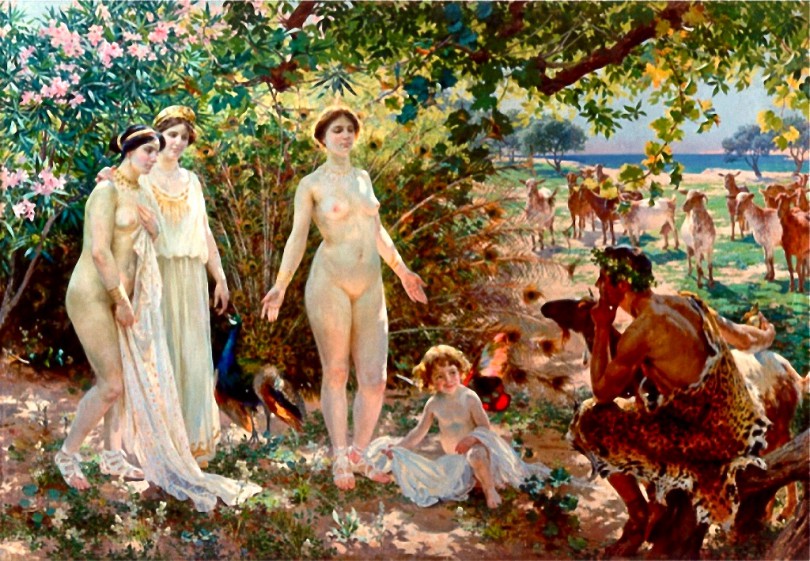 Since the prehistoric era, humans have struggled to free themselves from mortality. So, they engaged in pursuing the immortality of the gods.

When we speak of immortality nowadays, instantly the immortality of the soul comes to mind, a belief already known to the prehistoric man. Death was and still is the enemy we try to deceive, and although the material body dies anyhow, we seek for immortality in the world of spirit.

Before the Ancient Greeks formulated a theory about the separation of the material body and the immaterial soul,(link Orpheas2) they believed that some beings are born mortal and others immortal. Mortals were the humans as all other creatures of the animal kingdom. Only gods were immortals.

The source of immortality

Still, what made the gods immortal? According to one of the most ancient perceptions, immortality was granted by eating a specific nutriment. This is what do some archaic myths reveal. In these myths, the food of immortality is related to beautiful gardens and trees that produce sublime fruits or some special nutriment inaccessible to humans. Those trees are often guarded by crawly monsters. In Greek Mythology, gods ate ambrosia and drank nectar. Both words mean one thing: immortality.

Ambrosia was a fluid food like oil or thick soup. Gods used it as food but also in order to wash their body and as smearing for the dead bodies of great mortals. Ambrosia was also the name of kykeon, a mix of water, oil and various fruits which was offered to the gods.

Nectar was a drink and Homer compares it to red wine. In his Iliad, mother of Achilles goddess Thetis pours nectar into the nostrils of dead Patroclus.

The earliest quester of immortality known to us is Gilgamesh (2200 BCE). The Babylonian hero sets of to find the herb of immortality, but a snake fools him and he can’t find the way. In Hinduism this nutriment is called “Amrita” and only a sacred snake can locate it and offer it to the gods. In ancient Egyptian scripts it is mentioned as “White Drops” and the Zoroastrians of Persia call it “Soma”.   In ancient Chinese tradition, gods are fed on the “Peaches of Immortality”. This designation reminds us of the “Golden Apples” which grant eternal youth in Scandinavian Mythology. It reminds us of the “Golden Apples of the Hesperides” in ancient Greek Mythology as well.

The Garden of the Hesperides and the “Golden Apples”

In Greek Mythology, Hesperides (= westerns) were Nymphs, numbering three, four or seven depending on the myth. Their father was Hesperus, the personification of the evening star, the planet Aphrodite (Venus). The same star is known during its morning emergence as Heosphorus, the “Light-Bringer”. His father was Cephalus, who, as reported by tradition, was the son of Hermes, who was the god to guide the dead to the Underworld.

The first golden apple tree, was the wedding present of Gaia to Hera when she married the king of the gods, Zeus. Hera planted it in the holy garden on mountain Atlas. The garden was tent by the Nymphs Hesperides, but as they sometimes took an apple for themselves, Hera had the sleepless dragon Ladon wrap himself around the bole of the tree so that no one would approach.

If what the Greeks named “Golden Apple” is the same fruit as the peaches of immortality for the Chinese, then it is very interesting that there is a variety of peaches called “Nectarine”, a word descending from “Nectar”. Cypriots call apricots “Golden Apples” and the orange tree is often referred to in various sources as “Golden Apple Tree”. Although oranges where not known in Europe up until the Middle Age, according to tradition these “Golden Apples” were in fact oranges. This rumor was so widespread, that still today all varieties of citrus are called Hesperoids (from Hesperia and Hesperides) in Greek and “portokali” (Greek for orange) descends from the word “Portugal”, where the garden of Hera was to be found according to a version of the myth.

Some believe that the produce of the golden trees in the garden of Hesperides was Ambrosia. An exquisite eagle accompanied by white doves would then transport it to mount Olympus for the gods to consume it.

The garden of East

Even though Christianity does not sympathize for the paganism of the ancients, it has adopted an ancient Hebrew myth which unfolds in a paradise garden at the mouths of Tigris and Euphrates rivers in Mesopotamia. There, the protoplast couple lived an imperturbable life which should have lasted forever. We all know that they lost this privilege once they ate the fruit God had forbidden. This was the fruit of knowledge of good and evil. What most of us haven’t noticed is that the myth also tells us of another tree: the tree of life. God sent angels to guard the entrance to the garden, in case humans came back and ate off the tree and therefore lived forever. Exactly as the reptile-dragon had to protect the garden of the Hesperides!

The reptile also points us to the snake that tricked Eve and condemned mankind to death. The snake in the Bible coincides with Heosphorus (Lucifer), an once great angel who fell from glory by not meeting God’s demands. You might remember that Heosphorus is the name during the morning emergence of planet Aphrodite, Hesperus!

The path to immortality

The myth of Genesis implies that humans were created immortal and lost this privilege when disobeying their creator. In order for this fate to change, man has to blindly obey god’s orders until Judgement Day arrives.

In Greek Mythology instead, only gods were immortal unless they broke an oath. Their access to holy food would then be revoked and they’d have to live in a state of permanent and complete paralysis, as Hesiod tells us in “Theogony”.

But man was created mortal and as philosopher Metrodorus once said: “Facing all other dangers we can gain safety for ourselves, but so far as death is concerned, we all live in a city without walls”.

The best situation mankind ever experienced was a premature “golden epoch” during which humans lived long lives and died in their sleep peacefully. Even when Hercules killed the dragon that protected the garden of Hesperides, humans didn’t gain ambrosia.

Although ancient Greeks were impressively accustomed to the concept of death and the gods they worshipped neither demanded obedience nor would promise immortality, one can observe that since the 6th century BCE and onwards, along with the further development of rational thinking came the need for a more intensive metaphysical search. Orpheus’ ideas about reincarnation, Eleusinian Mysteries and later on Plato’s philosophy of soul will all carve a new path for this quest. On this path, the spirit of man can escape its fate of death as long as it disengages from the burden of matter.

If man achieves this, Plato says, the soul will conquer Virtue and will feed on nectar and ambrosia.