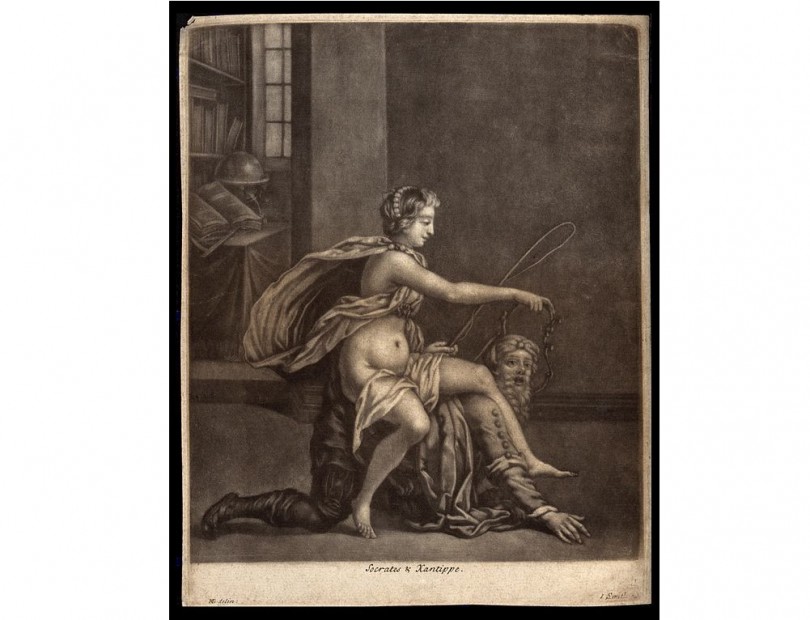 “If you find yourself a good wife, you’ll be happy. If not, you’ll become a philosopher”, said Socrates the famous philosopher, who, according to his contemporaries, was talking out of his own experience. Xanthippe, Socrates’ wife, was a woman who didn’t leave a good impression. But today given the temporal distance to the 4th century BCE, we can take a clearer look at the relation of this strange couple. Was it Xanthippe’s explosive temper that led Socrates to becoming a philosopher, or was maybe Socrates’ devotion to philosophy that defined his wife’s character?

We have reasons to believe that, unlike her husband, who was the son of a stonemason and a midwife, Xanthippe was the child of an aristocratic Athenian family. First, her name is the feminine form of a word meaning “blond horse” and we know that people who were wealthy enough to raise horses used to name their children with names referring to horses. Second, the firstborn son of the couple didn’t get named after his grandfather from his father’s side, which was, and still is in Greece, the custom in child naming. He was named Lamprocles (= shiny glory) and this also is an aristocratic name, maybe Xanthippe’s father’s name. The name of Socrates’ father (Sophroniscus) was given to their second son, something really strange, unless Xanthippe was indeed of aristocratic descent or was at least of higher social class than Socrates.

Lamprocles appears in a text of Xenophon complaining about his mother, claiming that she is so cranky that no one can stand her. Plato presents Xanthippe at a very difficult moment of hers, when she visits Socrates in prison right before his execution. The moment Socrates’ friends arrived, Xanthippe holding one of her sons, began screaming and lamenting “Socrates, for the last time your friends will greet you now and you them”. Socrates asked someone to take her home and she burst out into a heartbreaking weeping and screaming while beating herself as she was pulled away from his side. But were those who called her cranky and hysterical, right, or is her bad reputation unjust?

We want to be fair, so we ought to take into account that excessive mourning was not a whim of Xanthippe. Women in Ancient Greece mourned in a frantic way trying to share their distress for their loved ones who were dying or had died. Author Lucian reports that relatives and friends of a deceased would find themselves in such a bad state that one would feel more sorry for the living than for the dead: they’d cry sobbing, pulling their hair and hitting their head and chest. They’d even cut their cheeks with their fingernails… As for the complaints of the teenager Lamprocles, they are not much different to the complaints of every teenager since…

Xanthippe therefore, was a young aristocrat who for reasons unknown married a poor, ingenious philosopher whom she probably did not even choose herself, as it wasn’t accustomed for women to choose their own luck back then. The way she mourned for her husband indicates that she loved him, but for sure, their marriage was not a fairytale.

Socrates as a father and husband

Not only was Socrates poor, but he also married at old age. We know that his first son was born when he was 55, so we can assume that he was at least 30 years older than his wife, given the fact that women would get married at young age in ancient Athens. Not only was he poor, he was also ugly. His contemporaries said that he looked like a Satyr or a Seilenos. This poor and ugly man also had some bizarre habits.

He didn’t pay any attention to the needs of the body. He was resistant to hunger, thirst, cold and alcohol. He’d wear the same tunic summer through winter (we hope that he washed it from time to time). He’d dance all alone in his house and sometimes he’d stand still in the middle of the street to meditate, totally unaware of the environment surrounding him. This even happened to him once at the camp on a day before a very important battle. His fellow soldiers watched him just stand there unmoving in the summer heat for 24 consecutive hours!

This strange man had one and only one mission in his life: to help his fellow citizens discover the truths they kept hidden in the depths of their souls. He believed that evil is born of ignorance, and that if he helped his interlocutor acquire the necessary knowledge, he’d understand that being bad doesn’t serve your own interest. “No one is willingly bad”, he claimed while trying to fight ignorance. This noble effort would normally, maybe, fill his wife with pride, if it didn’t cause practical problems. And the “problem” with Socrates was that, in contrast to all other masters of his time, he would not accept any payment from his students. The mission he had devoted his life to, didn’t bring him any profit at all. This surely was one of Xanthippe’s problems and a permanent reason for family quarrel.

Yet, Socrates was not indifferent to his wife and children. When Lamprocles complained about his mother’s crankiness, Socrates spent a lot of time admonishing him. After having explained to him in detail all the efforts his mother had put into raising him, he concluded: “Her, who takes care of you the best she can when you’re sick so you’ll get well, who makes sure you have everything, who prays to the gods for you and makes solemn promises so that they’ll give you all goods, her, you call unbearable?”

If Xanthippe was an ordinary woman of her time, if she was not interested in anything more than the wellbeing of her children and the financial state of her household, then it was indeed a very wrong choice of husband her father made for her. On the other hand, if she really was that miserable in her marriage, the Athenian law wouldn’t stop her from getting divorced. But neither did she, or Socrates, ask for a divorce. Hence, we can assume that this relation was working out in some way. His friends kept wondering why this prudent and mild man would choose such a bossy woman. In fact one of them, Antisthenes, boldly asked him: “How can you be living with the worst woman ever been and ever to be?”, and Socrates replied:

“As my life’s task, I have chosen to consort with people. I have Xanthippe knowing that if I can tolerate her, I can definitely tolerate anyone else. »