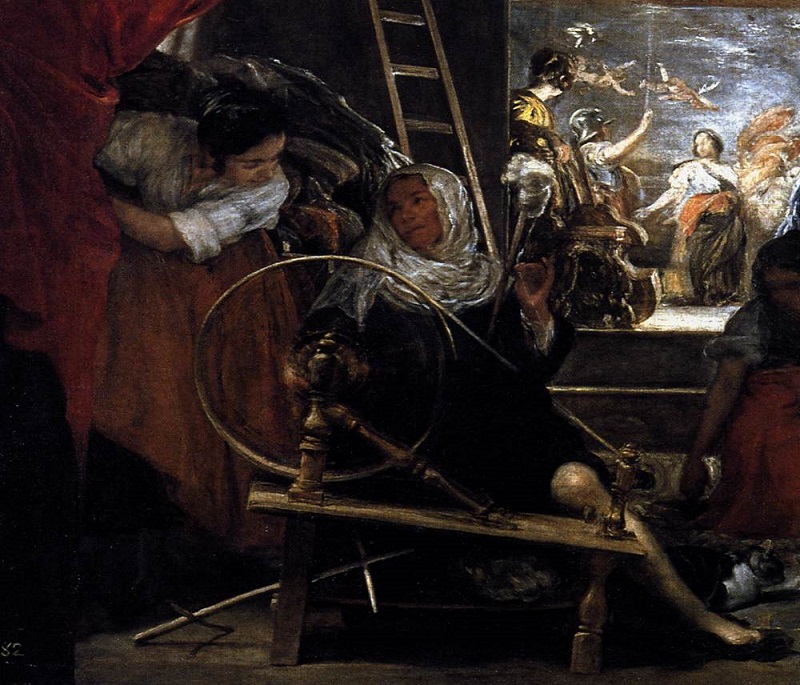 She grew up in the small and inconspicuous village of Colophon in Lydia. Her mother had passed away and her father, Idmon, was a dyer. Nor could the young girl be proud of her wealth, neither of her ancestry. However, she could be very proud of her talent in the art of weaving. Her weavings were so impressive that even the Nymphs would travel from the river Pactolus to her village just to admire them. Many times they would stay there for hours watching the skillful fingers of the girl weaving.

She was greatly admired and her fame rose so much that soon the rumor spread that her teacher was the goddess of weaving herself, Athena. But Arachne taking excessive pride in her achievements didn’t even want to share her fame with the goddess. She wouldn’t admit that her talent was a gift from the goddess and ended up challenging her to a weaving contest. “Let her compete against me, and if it turns out that she is better than me, then I will destroy all my work”, she suggested.

The goddess decided to give the young girl the chance to reconsider her proposition. She appeared to her as an elderly lady and kindly asked her to listen to her words as she was a woman of experience having learned a lot in her life-time. “It is not wrong”, she said, “to seek the praise of people when you’re processing wool with such great skills, but you should not deny the art of the goddess Athena. Moreover, you should apologize to the goddess and she will forgive you”. Arachne turned her frowning gaze towards the strange old lady and told her trembling in anger: “You foolish woman witless in your palsied age, your great misfortune is your old age. Let your daughter and daughter-in-law profit by your advice, if the gods have blessed you with this. As about me, I know my way very well and I’m not changing my mind. Take the road now and go tell your goddess to not avoid the contest and come here herself”.

“Pallas Athena will come to you”, the goddess said and took off her disguise. Arachne was taken aback for just moment before getting her proud look back on. Both threw themselves at work in a frenetic pace depicting scenes from the glorious past in their weavings. The goddess made a picture framed by olive branches, depicting the scene when the gods observed herself while competing with Poseidon for the name of the city which after the competition was called Athens, while the edges of the fabric portrayed all those whom the gods had punished for their arrogance: Haemus and Rhodope who transformed into mountains when they tried to look like Zeus and Hera; Antigone of Troy who transformed into a stork, Cinyras who was sentenced to grieve for his daughters for the rest of his life, and the queen of the Pygmies who transformed into a crane.

Arachne depicted the romantic adventures of the gods. Transformed into animals, rivers or natural phenomena they deceived innocent women. So, there was Zeus chasing girls as a bull, eagle, swan or rain. Poseidon, Apollo and Bacchus as well, seducing girls using similar imaginative transformations. Twenty-two cases of divine disguises fit into her woven! In the end, she decorated the frame of the picture with ivy and flowers.

The woven of the mortal girl was dazzling! It was just perfect and the goddess couldn’t deny it no matter how much it upset her. However, the themes that Arachne chose were a huge hubris, even bigger than her arrogance. The goddess ripped the woven and started hitting the girl with the shuttle of the loom. The girl in desperation tried to hang herself with a rope. Athena felt sorry for her and thought, since she is such a talented weaver, then she should weave forever! Immediately she sprinkled her with extracts of Hecate’s herbs and the girl shrank until she became a… spider (Arachne).

A simplistic interpretation of this myth is that Athena got so upset because the provocative weaver displayed the weaknesses of the gods. We would accept this reading, if we didn’t know that stories of the gods being naughty were widespread and not at all forbidden. So maybe, Arachne simply had not realized that it is foolish to provoke someone you can’t beat. Maybe all these were human figments trying to bring the gods closer to their level by attributing them with human weaknesses.

Then again, maybe Athena’s anger is caused by the nonsense of the young girl to believe that these allegorical narrations are true events. A myth can simply be the effort of humans to describe in their own terms phenomena and events they can’t perceive with their own senses. However, although myths are untrue stories, they can describe truths faded in time. This of course is the case with the myth of Arachne. It tells us the story of humans learning how to make clothes and covers out of fiber. How they acquired that knowledge by observing the diligent spider at work. And this probably happened for the first time in the Hellenic territory of Asia Minor.