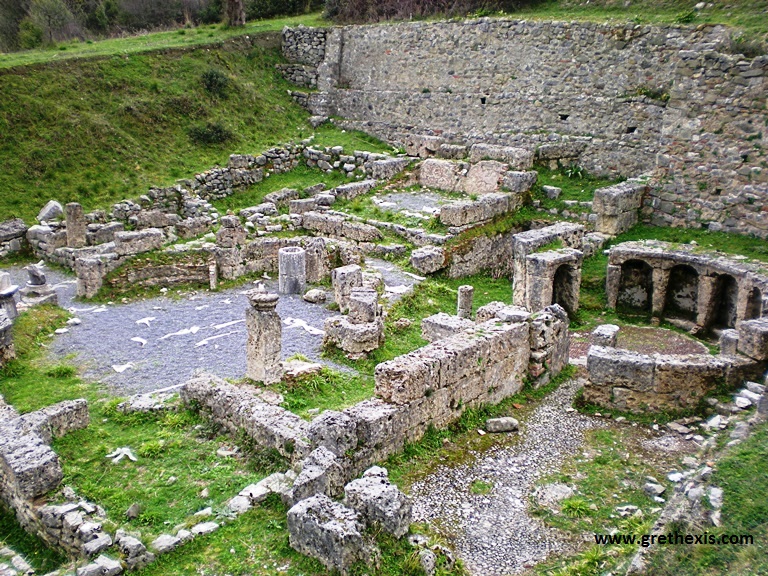 Every time I use the benefits of medical science, every time someone I know gets cured from a painful and dangerous disease, I wonder how people could live in ancient times without strong painkillers and all the medical equipment we have nowadays. What could you do to deal with an infection or a wound 2.500 years ago?

First, you would have to go to the healer of your neighborhood and he would make syrup for the pain, and he’d clean your wound and make a salve of herbs to speed up the healing. He might succeed, or he might not. If not, and if your wound kept getting worse and the pain stronger, you would have to go on a trip to meet one of the “professors” of the time. It’s time to visit an Asclepieion, maybe one of the most famous ones, if you have the means to travel.

Travelling was a challenge back then, but it was worth the effort. After all, everyone has only good things to say about Doctor Asclepius, the god who can heal people in his temples even from the worst diseases. And off you go as so many others do. So, while walking down the last few meters of the road leading to the temple, you will take a moment and stop to read the grateful inscriptions offered to the temple by those who have been cured. You’ll find them placed on both sides of the road; the first- ever medical records we know of. They say that the more you read them, the more you become confident you’ll get healed too.

Asclepius was the son of god Apollo and a mortal woman called Coronis. His mother died while giving birth to him, and the moment the fire to burn her dead body was lit,

Apollo pulled the baby out of her and saved him. Then, he handed little Asclepius over to wise Centaurus Chiron to raise him. He was the one who taught him the art of medicine, although according to another legend, it was a snake who disclosed to him the supernatural secrets that made him the greatest physician of the world. His understanding of human nature was so deep that he even accomplished to bring the dead back to life. But as the myth says, the balance got disrupted and Hades, the god of the underworld, got mad. And so Zeus had to take his life, only to resurrect him a little later on after making him promise that he would never bring any dead back to life again, unless he approved it himself.

Asclepius is still alive in the collective subconscious as the archetype of the therapeutic force within us. In a controlled environment with strict therapeutic rituals, the ancient patients would tune their souls to the forces of the present.  By focusing on their inner self, they allowed the archetypic force to heal their bodies and souls. It’s not to wonder that Asclepius’ daughters were Hygeia (hygiene), Panacea (all-healing), Akeso (healing process), Aglaea (beauty, magnificence) and Iaso (recovery of illness). His daughters were the outcome of his art.

Asclepius’ sons, and many more “healers”* (therapeutai), were the successors of his work. Initially, the word “therapeutis” used to mean “he who serves the gods”, but soon after it came to refer to the same as “healer” in modern languages; the one who offers medical care and cures. The patients would visit the Asclepieia, which were healing temples dedicated to the god of medicine, Asclepius. There, they would follow a specific process which would rebound to “enkoimesis” – a dream like state, something between anesthesia and hypnosis.

Behind the famous Ancient Theatre of Epidaurus, there was a sanctuary dating back to the Mycenaean times. The locals would worship there a goddess associated with healing and this worship lasted from 16th c BCE to 11th c BCE. On the same spot, three centuries later, they built a sanctuary dedicated the to the healer god Apollo Maleatas and in 6th c BCE another sanctuary was built next to it dedicated to Apollo’s son: Asclepius. Its greatest flourish came in the 4th c. BCE when expansion projects were implemented to make more space for the growing crowds that would come for healing.

The patients arriving at the Asclepieion were determined to get cured. The inscriptions we mentioned in the beginning, described so many impressive healing cases that the new patient would in advance get in the mood that strengthens any medical treatment.

In the temple there were two main rooms for those who had to stay for a few days, but there were also things we don’t see in modern hospitals: theatre, gym, spas, statues and shrines. Depending on the case, these would be part of the cure. But still, the priests-healers would also provide conventional health care. Operations were performed, fractures and contusions were taken care of, wounds were disinfected etc. And of course they would produce medicine of herbs for their patients. But conventional medical care was not enough for them.

Before anything else, patients would go to the baths to clean their bodies and relax. If necessary, they would also stay in the Asclepieion for 2-3 days following a strict nutrition program which probably included opiate ingredients.*** They’d also attend theatrical plays and make sacrifices to the gods. If you have visited one of the preserved Asclepieia, you will have noticed that the beautiful natural scenery and baths, theatre and light food can be half the cure for some cases.

When the time was right, the suppliants would entered the “avaton”. There they would strew on the floor peltry made of the animal they had sacrificed and lie waiting for the nighttime that would give them the therapeutic dream. Centered in the room stood the chryselephantine (ivory and gold) statue of Asclepius holding his Rod.** They chanted to the god pleading him to cure them during their sleep. The priest would enter the “avaton” and say prayers with words the others could not understand. When he left, melodies of flute and percussion would be heard from afar, so mild and slow-moving that the patients would soon immerse in a sweet but deep sleep. Then, the healers would enter the room and take care of the patients in silence. They’d massage those who suffered from musculoskeletal pain and clean wounds and sores. In the end, Asclepius’ sacred serpents were set free in the “avaton” to roam among the patients.

You can imagine what kind of dreams the patients had! God’s hands were touching their bodies and wounds. At times, they would see the god himself standing majestically over them holding his Rod, just like his statue stands centered in the “avaton”. One of the inscriptions in Epidaurus contains the testimony of Ambrosia, who describes her experience:

«Ambrosia from Athens, blind in one eye, came here as supplicant to the god. Walking around the temple she made fun of some of the curing methods she saw, because she could not believe them. It seemed impossible to her that a paralyzed or blind person could be healed by a dream. Falling asleep she had the following dream: Like if the god himself stood by her telling her she would be healed. But he asked her to pay for the cure by dedicating to the temple a silver pig as a reminder of her disbelief. After saying this, he ripped her eye and poured medicine into it. In the morning, Ambrosia left the temple all healed».

The priests each day decided upon the right treatment for each patient depending on the dream they had the previous night. The luckiest ones were those who had dreamt of Asclepius’ sacred animals, a rooster or a dog. The testimonials of the patients about the healing process and its result, shows us that even chronic diseases would be cured. And of course as it happens in these cases, patients would not forget to dedicate something to the temple as a token of their gratitude.

There were hundreds Asclepieia all over Greece. But the most famous ones due to their effectiveness were the ones of Kos, Trikki, Pergamon and Athens.

In Kos, on the hill where the Asclepieio was built afterwards, stood two sanctuaries dedicated to the healing daemon Paieon and to god Apollo. The Asclepieion offered mostly medical rather than psychotherapeutic services.

Pergamos was a Greek city at the shores of Asia Minor. Its Asclepieion was founded in the 4th c. BCE by someone who was healed in Epidaurus and wished to spread the worship of the miraculous god. Besides the core buildings, it also had a theatre and a great library. Claudius Galen, the prominent Greek physician of the 2nd c. CE, received his education in this Asclepieion.

Ancient Trikki (nowadays Trikala) is the region of Thessaly where Asclepius was born. Homer mentions that Asclepius’ sons, Machaon and Podalirius, who were healers too, were in charge of the ships the city deployed for the Trojan War. A neighborhood of modern Trikala is built upon the ancient Asclepieion.

The worship of Asclepius spread from Trikki to Athens. The Asclepieion of Athens was founded in 420 BCE and operated for circa a thousand years. By the end of the 5th c. CE, the Ascelpieion was completely destroyed and in its place a Christian temple was built dedicated to the Christian healers, Saints Cosmas and Damian.

All of the famous Asclepieia are worth visiting, but we would also like to recommend another Asclepieion which probably is not on the list of your travel guide. You will find it in Gortyna, Arcadia (main photo of the article). The ancient city is built in the valley of the beautiful river, Lousios. It was a passage for the athletes of Sparta on their way to compete in Olympia. Among the burial places and remains of public buildings you will find the ruins of the city’s Asclepieion, which also had thermal springs. The temple of the healer physician was so famous, that even Alexander the Great visited it in 335 BCE to dedicate his breastplate and his spear. There are only scant remains to be seen, but I promise you that the experience of your walk in this environment will be invaluable!

Hippocrates, the “father of medicine”, was himself offspring of Asclepius’ priests. His grandfather and father were priests at the Aclepieion of Kos and according to the legend their family tree led back to Asclepius himself. Hippocrates gathered information for his writings from the patient’s inscriptions, which were the first medical files of the time. He added his comments and experience and laid the foundations of modern medicine.

The greatest physician of the Roman world was the prominent Greek physician Galen who was a follower of Asclepius at Pergamon. He travelled and taught all over the Roman Empire and then settled in Rome as a practicing physician and even became the court and private physician of emperors. Galen systematized a rationalized approach of medicine based on Hippocrates’ heritage. Isn’t it fascinating to discover the roots of modern science?

*the English word “therapy” derives from the Greek word “therapeia” (θεραπεία) meaning care, cure, healing, treatment. The word therapist is of the same origin. In fact, the therapeutai of Asclepios were therapists, physicians, nurses and specialists of hypnotherapy and hydrotherapy, nutritionists, hypnotists and who knows what else!

** The serpent-entwined Rod of Asclepius is nowadays the symbol of medicine worldwide. The Rod symbolizes stability and the entwined serpent, longevity and rebirth.

***Nepenthes was the Greek name of opium. It consists of the negation “νη” and the word “πένθος” = grief. Meaning, the substance to relieve grief, sadness and pain.