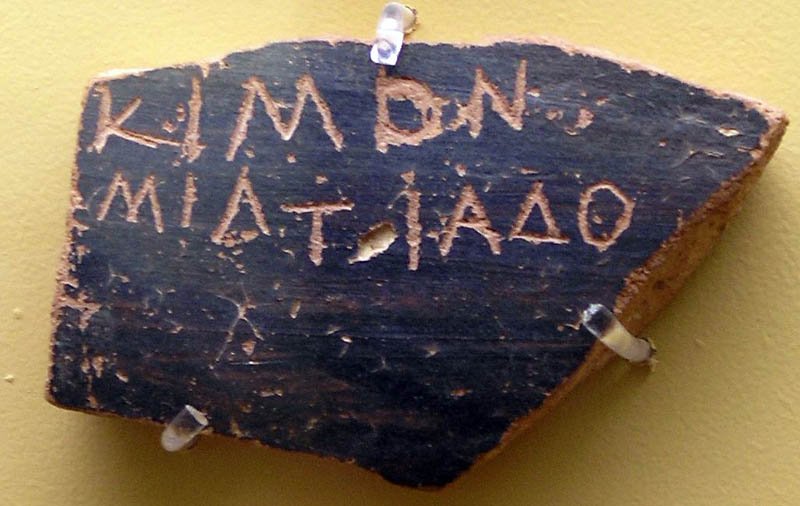 Cimon was the son of Miltiades, the hero of the battle of Marathon. He was wealthy and connected with powerful people. His mother was Hegesipyle, daughter of the Thracian king Olorous. His sister was married to the wealthiest Athenian of his time, Kallias, and Cimon was married to Isodice, member of the Alcmaeonidae clan, the family of great Pericles.

Cimon’s appearance was impressive, his attitude was friendly to all and he was very persuasive when speaking. During the years he was politically active, he managed to smooth the tense relations between Athens and Sparta, mostly because he admired the Laconian way of life. The Spartans trusted him and as a long as he was active they would seek peace with Athens.

An aristocrat, friend of the poor

His most impressive achievement was the loyalty of the social class of landless people. The landless had the obligation of manning the victorious Athenian fleet and were traditionally supporters of Themistocles. So how did this happen that these poor Athenians who were exclusively responsible for the safety and well-being of the city, would avidly support a rich aristocrat who limited their political power and who had plans to empower the authority of Aeropagus, the high court which consisted of rich aristocrats?

Besides his very good looks, Cimon’s great advantages were his cheerful and social personality, the ease with which anyone could approach him, and mostly, his generosity. His rich friends accompanying him on the street would exchange their luxurious clothes for the clothes of poor people they met and they would give away valuable coins to anyone in need. Cimon himself had brought down the fence of his estate so that anyone could have access to the fruits and he even organized a daily soup kitchen in his own house. If you were an unlucky Athenian without income, you could daily enjoy a meal in the house of this friendly and generous aristocrat. Having the support of his own social class and the love and gratitude of the poor, Cimon was the strongest politician of Athens for more than ten years and no one seemed capable enough to surpass him.

In 463 BCE, when Pericles made his first steps in the political scene of Athens, Cimon had already been dominating for 10 years, as the Athenians would vote him for the position of General each and every year. His qualities in leadership had already emerged at the time of the naval combat of Salamis, when he stood up against the interests of his own class and supported Themistocles’ proposition to fight the Persians at sea. Trying to convince his fellow citizens, he did something symbolic and touching: He went up to the Acropolis and offered the reins of his horse to the goddess Athena. It was his way of pointing out that in this particular occasion it wouldn’t be the cavalry to save the city.

Cimon also played a leading role in the efforts to form an alliance of Greek cities under the leadership of the Spartans. The goal of this alliance was to liberate the Greek cities of Asia Minor which were still part of the Persian Empire. And when the Spartan Pausanias lost the trust of the ally cities because of his harsh attitude, it was Cimon and Aristides who gained their trust back with their gentle ways. And so in 478 BCE, Sparta hands over the leadership to Athens and the Delian League is formed with consensus of all cities and all political parties.

Cimon made good use of his connections, his talents and the support of Aristides to get rid of his main political opponent, Themistocles, who had gained great political power after the Persian wars. The deeper cause for Themistocles’ expulsion was the hatred of the Spartans from the time when he deceived them and started building the Long Walls. Lacedemonians’ dislike for Themistocles would always put in jeopardy the smooth, but always fragile, relations between these two powerful cities. Cimon’s priority was the liberation of any Greek cities still under the Persian yoke. He knew he could not do that without Sparta. Cimon convinced the Athenians that his political plan was right and so in 473 BCE, Themistocles was cast from Athens.

His main political rival was Ephialtes, an old friend of Themistocles and member of the same party. After Themistocles was exiled, Ephialtes took charge of the opposition. It is mentioned in ancient sources that he was a just and respectable democrat. He keenly desired to let people have more saying in the political bodies of the city and mostly, to limit the authority of Areopagus, the high-court which was the last bulwark of the aristocrats. He knew for this to happen, he would have to get rid of his almighty opponent, Cimon.

The failure in Thasos

The chance for Ephialtes came in 465 BCE when Athens went against the island Thasos in Macedonia for the control over the goldmine and some trade centers in Thrace. When Thasos left the Delian League, it was the first time Athens went into war against an ally city. Cimon took charge of the tricky siege of the island. It lasted two years and its cost was a lot of money and lives. For Cimon, it turned out to be a huge failure!

Ephialtes and his party start gaining control. While Cimon was away in Thasos, the Athenians who were disappointed by now, elected among others for the position of General, Ephialtes and Pericles. They both didn’t waste any time and accused members of the Areopagus and the parliament of profiteering. And when Cimon returns in 463 BCE, they charge him with breach of duty for not having conquered Macedonia and for having bribed the Macedonian king. The charge was totally groundless. First of all, the goal of the expedition was not to conquer Macedonia as a whole. Secondly, anyone who knew Cimon’s personality would know that the accusation of bribe was just ridiculous. It clearly was a political move of the opposition trying to take advantage of Cimon’s decreasing popularity. It was years before that, when Pericles’ father, Xanthippos, had used the exact same methods to attack Cimon’s father, Miltiades.

Pericles, who had been chosen to be one of the official prosecutors, had been given a great chance to make an impressive entrance into the political scene. His masterful rhetoric, his imposing looks and his powerful style didn’t go unnoticed. Even though in the end, Cimon was exonerated of course.

The adventure in Sparta

During the next year, Ephialtes and his party had another chance to attack Cimon. This time the occasion came from the South. The Spartans had to deal with a serious rebellion by the helots in their city. Spartans asked the Athenians for help. Athens was still, officially at least, their ally. The Ecclesia of the city, the principal assembly, is split in half and there is upheaval. Ephialtes tries to convince the Athenians to refuse any help to the city “which is a rival of Athens, and let the spirit of Spartans fall to the ground and step on it”, Plutarch says. But it seems that the supporters of Cimon, who is a friend of the Spartans, still have the majority. In the end, the Ecclesia decides to send help with 4000 soldiers under the command of Cimon.

However, the political environment of Sparta had changed and the support of Athens received no appreciation. The Spartans were afraid that the progressive Athenians would try to undermine and overthrow their regime. The Athenians were asked to leave. For this great insult, they charged Cimon. In 461 BCE, Cimon was exiled from Athens and the extreme democrats Ephialtes and Pericles take Athens’ luck into their own hands. Later that year, Ephialtes is murdered. It is not known who did it and this was the first time a politician was murdered in democratic Athens. Now, young and inexperienced Pericles becomes leader of the democratic camp.

After a failed attempt of the Spartans to take over Attica in 457 BCE, Pericles suggests Cimon should be called back from exile. Cimon achieved a truce with the Spartans for a few months, but the situation changed again quickly. Then, the Athenians attacked Peloponnesian cities, Cimon left Athens again and returned in 451 BCE when his original exile sentence was over.

Pericles still insists on his peace plans with Sparta and adopting Cimon’s political plan, assigns him with the task of reestablishing the peace talks. Pericles was well aware of the fact that the real danger was coming from the East and he knew he couldn’t face the threat without the Spartans. Cimon came back with a five year truce with almost no terms.

Cimon was killed or died of illness in Cyprus the next year (450 BCE) during the siege of Kition (called Larnaca nowadays) which was a Persian naval base. Cimon died true to his initial goal: the liberation of any Greek city under Persian yoke. Pericles never stopped pointing out Cimon’s significant contribution to Athens’ glory. He even put Cimon’s sister husband, Kallias, in charge of the negotiations with the Persians and many of Cimon’s followers supported Pericles’ political decisions strongly.

Cimon dominated the Athenian political scene for three decades. He offered his skills for the fight against the Persians and worked hard for the forming of the Delian League. He did not try to redeem his great fame to empower his political camp and always kept helping his homeland and respecting the decisions of the majority even when his political opponents were in power. Even though he was a conservative aristocrat, he never was an enemy of democracy. Even more, he managed to smooth down the conflicts between the two parties. He was a bright example of a patriot politician who had a realistic view upon things and who knew how to adapt to change so that he could help his city under any circumstances. A politician who would dare to ally with his opponents if his fellow citizens would benefit from this.

On the other hand, he knew how to handle the volatile mood of the citizens, to convince them of the righteousness of his suggestions by appealing to their emotions, to “come down” from his aristocratic throne and associate with them no matter their social class. We don’t know whether his behavior was genuine or insincere (Plutarch believes the first option; Plato believes he was just a demagogue). But we do know that his contribution to the political life of his time was remarkable! And the value of the things we can learn from him, simply priceless!