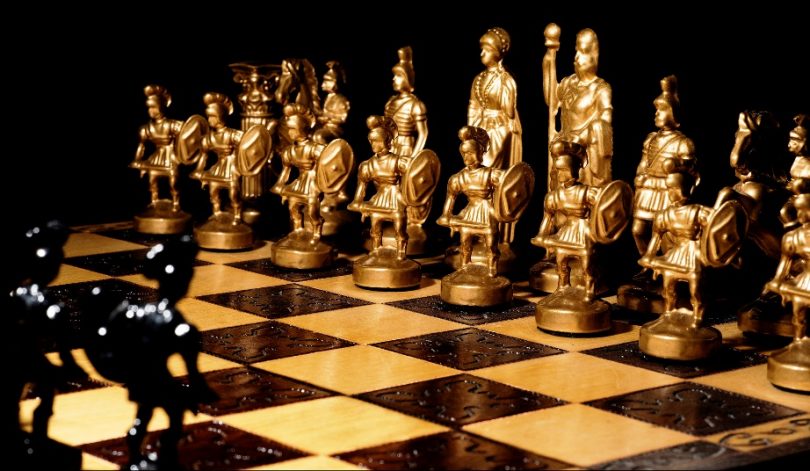 The Peloponnesian War was the greatest ever disaster to hit the city-states of Ancient Greece. The Peloponnesians defeated and conquered Athens, however Sparta did not benefit from the victory either. This long lasting war exhausted the city so much that they had to accept the arbitrage of the greatest enemy of all Greeks, the Persian King. Through the events of this horrible civil war, Thucydides chronicles the behavior of the opponents and draws valuable conclusions which are useful, not only in warfare, but also in our everyday battles in life.

War is a matter not so much of arms as of money (1.83 – Speech of Archidamus, king of Sparta)

Concessions to adversaries only end in self-reproach, and the more strictly they are avoided the greater will be the chance of security. (1.34 –  Speech of the Corcyraeans)

Inasmuch as good policy against an adversary is superior to the blind attacks of brute force. (3.48 – Speech of Diodotus)

That war is an evil is a proposition so familiar to every one that it would be tedious to develop it. No one is forced to engage in it by ignorance, or kept out of it by fear, if he fancies there is anything to be gained by it. To the former the gain appears greater than the danger, while he latter would rather stand the risk than put up with any immediate sacrifice.  But if both should happen to have chosen the wrong moment for acting in this way, advice to make peace would not be unserviceable.

It is just as much in men’s nature to rule those who submit to them, as it is to resist those who molest them. (4.59,61 – Hermocrates of Syracuse)

The confidence with which we form our schemes is never completely justified in their execution; speculation is carried on in safety, but, when it comes to action, fear causes failure. (1.120 – Speech of the Corinthians)

Now it is folly to go against men who could not be kept under even if conquered, while failure would leave us in a very different position from that which we occupied before the enterprise.

We all know that that which is farthest off and the reputation of which can least be tested, is the object of admiration. (6.11 – Nicias to the People’s Assembly)

Since in too many cases the very men that have their eyes perfectly open to what they are rushing into, let the thing called disgrace, by the mere influence of a seductive name, lead them on to a point at which they become so enslaved by the phrase as in fact to fall willfully into hopeless disaster, and incur disgrace more disgraceful as the companion of error, than when it comes as the result of misfortune. (5.111 – The Athenians to the Melians)

For it is not the miserable that would most justly be unsparing of their lives; these have nothing to hope for: it is rather they to whom continued life may bring reverses as yet unknown, and to whom a fall, if it came, would be most tremendous in its consequences.  And surely, to a man of spirit, the degradation of cowardice must be immeasurably more grievous than the unfelt death which strikes him in the midst of his strength and patriotism! (2.43– Speech of Pericles)

The truth is that great good fortune coming suddenly and unexpectedly tends to make a people insolent: in most cases it is safer for mankind to have success in reason than out of reason; and it is easier for them, one may say, to stave off adversity than to preserve prosperity. (3.39 – Speech of Cleon)

Those whom fear has made suspicious, may be carried away by the charm of eloquence for the moment, but when they come to act follow their interests. (6.83 – Speech of Euphemos)

Men’s indignation, it seems, is more excited by legal wrong than by violent wrong; the first looks like being cheated by an equal, the second like being compelled by a superior. (1.77 – Speech of the Athenians)

Men are also by nature as glad to give way to those who first yield to them, as they are apt to be provoked by arrogance to risks condemned by their own judgment. (4.19 – The ambassadors of Sparta)

I think the two things most opposed to good counsel are haste and passion; haste usually goes hand in hand with folly, passion with coarseness and narrowness of mind. (3.42 – Speech of Diodotus)

The good citizen ought to triumph not by frightening his opponents but by beating them fairly in argument. (3.42 – Speech of Diodotus)

Where the rewards for merit are greatest, there are found the best citizens. (2.46 – Pericles’ Funeral Oration)

A man possessing that knowledge without that faculty of exposition might as well have no idea at all on the matter: if he had both these gifts, but no love for his country, he would be but a cold advocate for her interests; while were his patriotism not proof against bribery, everything would go for a price. (2.60 – Speech of Pericles)

Neither youth nor old age can do anything the one without the other, but that levity, sobriety, and deliberate judgment are strongest when united. (6.18 – Alcibiades to People’s Assembly) 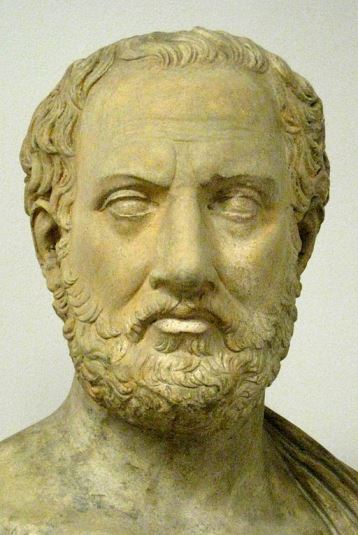 Thucydides was born in Alimos, Athens, but had origins from Thrace, where he owned a huge patrimony (fields and gold mines). He was a relative of Miltiades, the hero of Marathon, and Cimon. At the age of 30, during the first years of the war he wrote about, Thucydides too, suffered from the great plague that killed almost 25% of Athens’ population. Fortunately, he was one of the lucky ones to recover. In 424 BCE, serving as general in the army, he failed to save Amphipolis from the Spartans and the Athenians sent him into exile. This if very fortunate for us, because these 20 years of exile gave him plenty of time to travel and write his valuable book of history. Tradition has it that some disease killed him in 399 BCE, the same year both Socrates and King of Macedonia Archelaus died. But it’s more likely that he died 4 years later while still working on his book. The last sentence he wrote is “When the winter after this summer is over, the twenty-first year of this war will be completed”. He did not get to chronicle that winter, but Xenophon documented for us this winter as well as the remaining 6 years of war.