«One who can not respect himself can not respect another». You’ll find a proverb expressing this principle in almost any culture. Actually, this would be the first advice you’d give to someone who needs some self-esteem boost: “Don’t worry about what others think of you”, but this call to action is not applicable in real life. Self-respect depends upon self-confidence and of course we should not let anyone lessen our self-confidence or manipulate our behavior. However, what we are, our self which we’re trying to trust and respect, has to interact with the selves of others around us, inevitably.

And this is also the thought of Plato, who would probably tell us the proverb the other way round: he, who doesn’t respect others, won’t respect himself, either. And if we do respect others, we can’t just disregard their opinion and feelings. For Plato, the opinion others have of us not only matters, but even influences significantly the opinion we will form about ourselves.

So, Plato tells us what a person who “does not dishonor his soul”, or as we’d say nowadays, who feels good about himself, does and does not. What is the relation between self-respect and love for the truth, participation in actions for the common good, justice and love for learning?

In the end, we might find out that self-respect is less of an inner matter than we might believe. 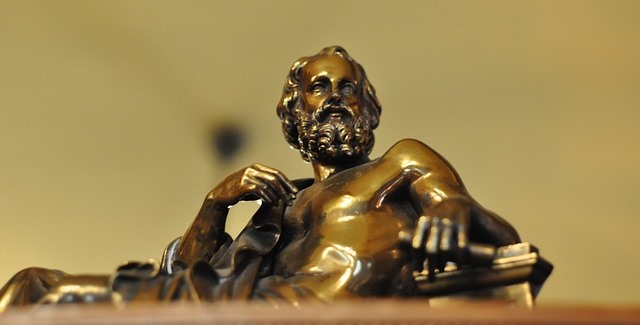 Nothing but the truth

Truth is the highest of all goods, higher than any god or person. If you want to live a happy life, you should partake of the truth from your earliest days, so that you may live as a true person for as long as possible. For then, you can be trusted and appreciated. But he, who loves voluntary lie, is not to be appreciated; and he, who loves involuntary lie, is a fool and not to be appreciated as well. Neither case is enviable, because as time advances no one will trust them and they will end up alone.

He that does no injustice is worthy of honor, and he who not only does no wrong but prevents others from doing it, is twice as worthy of honor. While the former counts as one man, the latter is the perfect citizen and counts as many men by means of uncovering the injustice of others.

If you share your virtues and wisdom to make them common possession of your city and don’t keep them to yourself, you’ll be worthy of praise for this, too. This way, all men will strive for the excellence of virtue and the whole city will see its beneficial effects on life. Every man will try to improve without slandering the others. If one is willing, but unable to impart, he will take second place. And if there is a man of virtue who does not want to share out of envy, we shouldn’t diminish him. We will of course criticize this attitude of his, but he should also be praised justly for his virtues; and it would be best if we tried to become that virtuous ourselves, too.

A person who respects himself combines strictness with goodness. That means he is just, but lenient. Incurable or hardly curable evil deeds of injustice should be punished strictly. On the one hand, curable evils should be punished too, but on the other hand let’s not forget, he is pitiable whose soul is full of evils. In these occasions, first it’s important to control our rage. But if we see that the harm can’t be undone or that the wrongdoer shows no intention of making things right, then we can let our anger burst.

We are great, but we can become even better

You show self-respect when you do not love your self more than it deserves.

Too much self-love blinds us and makes us perceive bad things as good and just, and disgraceful things as beautiful. We then always believe we’re right and ignore the truth. However, a great and respectable person cherishes righteous deeds more than himself, no matter where these deeds came from. On the contrary, a person who constantly justifies his deeds is just a fool, believing his ignorance to be wisdom. And when that happens, we think we know everything when in fact we know nothing. Believing that, we don’t let the experts handle the things we can’t cope with, and we simply end up making a mess of everything. So, the real objective is not to exalt ourselves without a reason, but to improve and learn without feeling embarrassed.

Aristotle, Plato’s student, wrote that to live alone, outside of society, one must be either a beast or a god. I think we agree it’s quite unlikely to become god, but a person without self-respect can easily become a beast. And if Plato is right, he who does not respect others, won’t respect himself, either.