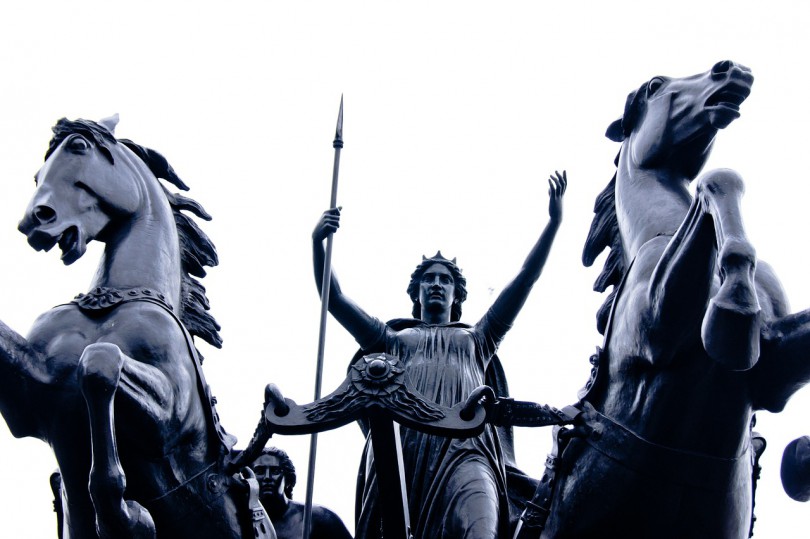 The “Republic” is one of the most debated works of Plato. It is an elaborate and complex dialogue, in which Socrates describes an ideal city, or rather an ideal polity. Besides, this is what the Greek title “Politeia” means. Nevertheless, it is not about the polity of a city-state, but of the human soul.

Most people believe this ideal state to be Socrates’ polity proposal, but in fact it is an ethical exploration of the concept of justice. Because the subject of the book is not “how an ideal state should be”, but as the author explains in the beginning, the subject is justice. Who is righteous and who unrighteous, whether it is good for a person to be just, whether the unjust are happier than the just and other similar matters. The participants in the dialogue attempt to explore the exact meaning of the virtue of justice talking with their master about all the theories of their time about natural law, human made law and the law of the powerful. Once they reach a point when no one can convince the other of the rightness of their theory, Socrates comes up with a contrivance, a method, which he believes will guide them securely to the true definition of justice:

“I suggest we’d investigate the issue like if someone put people with weak vision to read small letters from a distance and then someone realized that the same letters, but bigger, are written on a larger surface, and it would seem to them, I believe, very fortunate if they had first looked at the bigger letters and examined if the smaller ones are the same… We say that justice is a quality of a person; But can’t it also in some way be the quality of a whole state? … And isn’t a state bigger than one person? So let’s first look at states to see what kind of thing justice is; and then let’s seek for it in each person individually with the similarities between the greater and the smaller”.

None of the participants was planning to go to the Ecclesia (peoples’ assembly) of the city and suggest a new system of governance to the Athenians. The protagonists of “Politeia” start building a city from scratch, step-by-step, trying to detect which of the things happening during the establishment of this imaginary city is just and what unjust, so that they then can detect the relevant parts in the human soul, which one will find difficult to locate before having read “the big surface” first. I don’t know if this is where it descents from, but we Greeks still use the expression “small letters” when referring to something that is tricky, incomprehensible and difficult to examine.

Having said that, the protagonists of “Politeia” didn’t have any political ambitions and Plato himself was not interested in becoming a legislator or king. And he definitely was not a fool to believe that the system he describes in his book could be implemented and sustained. Moreover, as he acknowledges:

“…you mean the state whose founding we just described, the city which only exists in words, for I don’t believe it can be found anywhere in the world. However, I said, that it might exist in the ideal in the sky for anyone who wishes to contemplate it and create it inside him. Whether it already exists or will ever happen, makes no difference at all, because this city’s politics will be his and only his”

Therefore, the laws of this imaginary state are the laws suggested by Plato as moral principles a person should live by regardless the political system of his city.

The three parts of the soul

Plato’s theory about the three parts of the soul is more or less known and has been the foundation for later ethical and psychological theories. In fact, when he refers to parts, he means the following functions of the soul ordered by priority:

The “logical”, concerns the mind, our ability of reason. We use this function to process incoming data and to make decisions. It is our way to seek for solutions to simple and complex matters.

The “emotional”, refers to our thymic, our spirit. When we are shocked by an incident, when we get upset and when we get enthusiastic, it happens with this part of the soul.

The “appetitive” is the humblest of all the parts and refers to our carnal functions and desires. It provides our body food, sleep, comfort and pleasure. This is the biggest “part” of the soul and it is also the most insatiable.

Happiness, Plato says, is possible only when each part affects its own matters and does not get in the way of the other parts. For this collaboration to work right and harmonically, it is important to give the leadership to the logical, our reason. Just as the charioteer of a chariot running in the races, is responsible for the cooperation between his horses. He does not abuse them, he does not favor one over another, but is always alert to harmonize their movements in order to lead the chariot to the finish line. If he does not commit to this responsibility and allows his horses to become lazy or to rampage, in the best case scenario he will lose the race and in the worst case, they’ll be driven off the road and the chariot overthrown.

These are the “small letters” Socrates mentioned in the beginning and was able to read along with his interlocutors after first having read the “big letters” while building their imaginary state from scratch. This is the meaning of the instructions given to the three classes of “Politeia”.

The third class, corresponding to the “appetitive” part of the soul, is the “producers”. They are those who produce the wealth working as farmers, traders, craftsmen or industrialists. Plato (or Socrates in the dialogue if you prefer) tells us little about them. He doesn’t instruct them how to live, what to do or don’t do or what to do with the earnings of their work. He doesn’t set any limitations for them, but one. Even though Socrates recognizes that depending on external circumstances and their abilities, some will be rich and others poor, he believes there should be a measure for this gap. Excessive wealth as excessive poverty prevents justice, and thus happiness to enter the state. In fact in his last work, the “Laws” (Nomoi) Plato argues in favor of property. He suggests that patrimonial property should be inherited and not be a subject of expropriation. As for “Co-cultivation”, it was out of question in his Politeia.

The second class is the “guardian soldiers”, meaning the army and police. Socrates says that in order for someone to be effective in this position, first of all he should develop his “thymic”, to be brave, honest and proud, to incline to gymnastics and have a proper body. But don’t imagine a boorish person who will only hunt the bad or will go into battle blind sighted. The guardian soldier also has to be educated in order to keep his “logical” part intact, because without the harmonic collaboration with reason, he would turn into a reckless fool who won’t know “when to be afraid and when not to”. It’s the job of the state to make sure that the intense emotions and impulses of the guardian soldiers will be channeled to activities for the greater good.

The first class, the “guardian rulers”, is the governing class and obviously corresponds to the highest part of the soul, the “logical”, the charioteer leading the chariot. Rulers of this imaginary state, can only become the excellent among the guardian soldiers after having received a hard education for many years. A ruler has to be decent, abstinent, versatile and certainly a philosopher! The class of the rulers is entrusted with the task to provide adequate education, to organize the defense or expansion of the country, and if necessary, to ensure the happiness of the city, which Socrates identifies with justice.

The governance of oneself

The conflict between reason and emotions is a timeless problem which we are still struggling to solve. The battle between our carnal desires and the needs of our mind still keeps causing us problems. And the choice between our personal interest and the interest of the community still remains a difficult task. Plato’s theory attempts to find a fair solution to these timeless dilemmas; by bringing the “Politeia” inside us.

Our carnal desires are the “producers” of our self and are entirely respected. Desires lead us to find the resources we need to preserve the two upper parts of our soul. It makes no difference what kind there are of or whether they are a few or many. When they are not satisfied, then one of the horses of the chariot rampages and refuses any cooperation. On the other hand, no matter how many desires we satisfy, the “appetitive” can never get enough. If our only goal is the satisfaction of the flesh, again the chariot will derail. Hence, the “guardian ruler” (our reason) is obligated to collect the proportional “tax”. That means time, skills and strengths to feed the “guardian rulers” and the “guardian soldiers”.

Our emotions, rage, hatred, pain, but also love, affection and compassion, our tendency to defend anything we feel is ours and anything that is precious in our environment, our excitements, are all respected, as long as we allow the ruler to put them in the service of the “Politeia”, in the service of our self and our happiness. As the “guardian soldiers” follow the orders of the “guardian rulers”, so should the “horse” of our emotions follow the commandments of the “charioteer”.

Using this invention, Socrates writes in “big letters” that it is foolish to squander our emotions trying to satisfy our living needs instead of trying to soften them looking forward to the satisfaction of our non-material substance. Feeling afraid of an upcoming harm, for example, is absolutely natural. But why let fear be reproduced to a degree that would make you paranoid losing control of yourself? Why not let reason handle the fear and transform it from a foolish panic into a useful weapon of protection? Feelings, like the “guardian soldiers”, like the “horse” of the chariot, serve our lives with success when they follow the orders of the “charioteer” and not when they collide or flirt with the nearby horse.

It is clear by now, that only the third part of oneself, our reason, the charioteer, the “philosopher king” has the necessary abilities to help us conquer the precious virtue of justice. If Socrates is right when he claims that justice means that “each minds his own business” (“ta tou autou prattein”) that is. Because, reason and reason only can ensure that every part of the soul will only do the things it is equipped for. That it won’t block the functions of the other parts.

Is it easy? No, it’s difficult; and that it is why it is so charming. It’s a big challenge worth to accept, because the rewards will come to us along the way, step-by-step. No need to become champions, just enter the race.