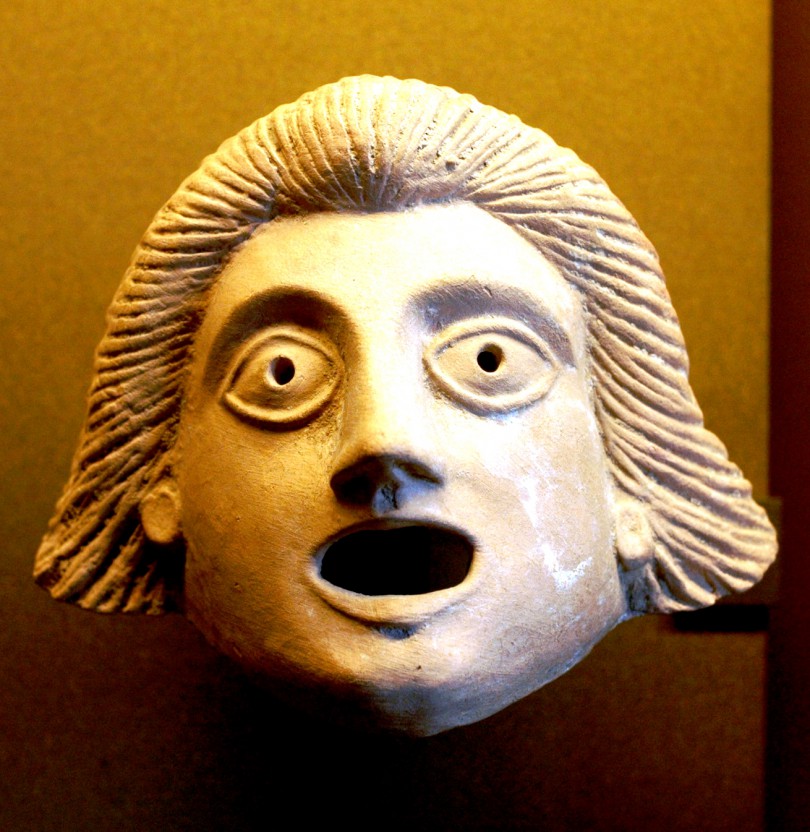 The art of theatre was born in Greece 2500 years ago when somebody thought of responding to the choir of a joyful and songful celebration for god Dionysus. And how did he interact with the singers? He simply replied by singing lyrics. This originated drama, comedy and later on cinema. This was meant to be the first theatric dialogue, ever. We will all agree that theatrical plays and movies are the main entertainment for most of us. However, for Ancient Greeks, attending the theatre was not having fun. It was amusement and through it, psychotherapy.

While the Greek word “διασκέδαση” (fun) derives from the verb “diaskedannumai” (διασκεδάννυμαι), meaning scattering yourself, “psychagogía” “ψυχαγωγία” (amusement) means the upbringing of the soul. “Ψυχαγωγία” simultaneously means educating, upbringing and uplifting your soul. Aristotle says that tragedy used the instruments of mercy and fear in order to lead the soul to catharsis (purification). The social and therapeutic aspect of tragedy was considered to be so important that a theatrical performance would be called teaching, a teaching anyone should be able to attend. Since the time of Pericles, the poor would attend this teaching for free.

From religion to psychology

The characteristic that made Greek tragedy so outstanding is the harmonic combination of primeval sentiment and reasonable thinking. The primeval emotions were expressed by the worship of god Dionysus, a vivid and untamed god who loves wine, dance and making love, while he dislikes any restrictions. Reason and moderation were the characteristics of god Apollo, the god of light, music and harmony.

Even though theatre was born in Dionysian rites, it gradually expanded to the field of Apollo; the same way our human brain first developed sentiment and then, developed the tools for logical processing over time. Nowadays we know about the two parts of the brain with completely different and distinct functions; sometimes we act irrationally following our emotional mind before reason interferes to process a stimulus.

What we feel of an experience, joy, pain, fear etc, is stored in a specific part of our brain. If we don’t extricate it from there to process it with our logic, it remains a repressed emotion in the dark room of our mind defining our decisions in the future. Everything that happens in our lives is perceived and evaluated through the filter of the emotions caused by our experiences. And that is how we form an opinion about anything. Long story short, there is no way to view at reality objectively while each one of us interprets everything through his own “lens”, through the mist formed by the intensity of our emotions, especially the negative ones. Tragedy is the breeze to clear that mist.

Fear and mercy are the fundamental emotions that Tragedy causes, making the viewer relive and face the experiences buried in the depth of his mind by expressing his pain. If he were alone, he wouldn’t dare to unfold the dark parts of his soul, being afraid to show weakness. But there in the theatre he can share this experience with all the others who live their own dramas. It is like a silent psychotherapy.

Try to visualize the moment when young Iphigenia arrives at the port of Aulis all excited about getting to marry the greatest hero of Greece, gorgeous Achilles. That’s what her father, king Agamemnon, promised her when he invited her to come. But instead of Achilles, death was waiting for her. She would have to be sacrificed to goddess Artemis in order for her to blow the fair wind to lead the ships of the Achaeans to Troy. What a treason! What a mean game of fate! What a cruel father! But, just a moment before the knife of the priest stabs her throat, goddess Artemis puts a deer in her place and takes her away to a foreign land to make her her priestess. She got spared the worst, but in Greek Tragedy there is no Hollywood like happy-end. Tragedy trains the viewer to accept reality, to empower his soul and not to simply entertain and stack more misery into his subconscious. He has to accept that Iphigenia escaped death, but will be forced to serve as a priestess to the goddess for the rest of her life.

When the play ends

Ancient theatre attendees knew the story and the outcome of the play even before watching it. They would probably have already watched the same story in the past or their grandparents might have narrated it to them. Nowadays it might sound boring to us, but when the purpose of the play is educational and not entertainment, then it makes perfect sense. Don’t we too tell our psychotherapist the same story over and over again? This indeed is the purpose: to familiarize ourselves with all the things we keep hidden.

Modern psychotherapy doesn’t promise wonders. If you get into this process you’ll probably continue it forever. This is because all the sorrow and fear we have piled up is the result of many different and complex events in our lives, but our endurance to face the process of revealing the sources of our pain is limited.

In Ancient Greece, catharsis of the soul was to be achieved not only by theatre, but also through various other forms of dramaturgical religious events, like processions and torch bearing.

Nowadays, you’ll have to consider yourself to be lucky if you come across a good presentation of Ancient Tragedy. Try your luck if you happen to be in Epidaurus during the summer. But until you come to Epidaurus, you can read Ancient Tragedies yourself and be your own director. Use your imagination and try out yourself the first ever psychotherapeutic method invented by men. It will only cost you as much as a book.