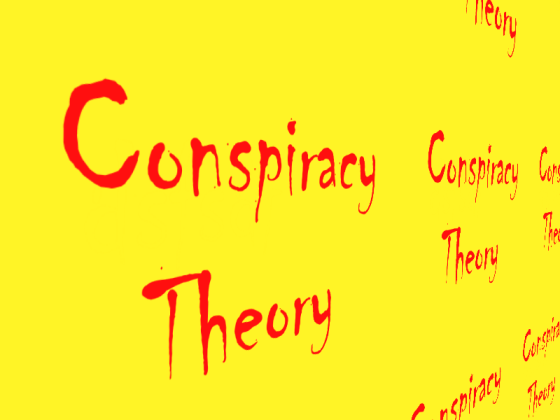 “HIV was created on purpose to reduce the population of the earth. Or, to make pharmaceuticals companies rich.”

“Man never landed on the moon”

“And yet, the earth is flat”

“Not only do aliens exist, they even live among us and control us”

“Water, food and the air we breathe are contaminated with chemicals to make us passive and obedient towards anything our rulers decide for us”

These are some of the most popular conspiracy theories with many followers worldwide. None of those theories relies on trustworthy evidence. If you look a bit deeper into any of these theories, you will quickly find out that the only way their followers can support them is by using other conspiracy theories.
Then why do people believe them?
Generally speaking, this happens for the same reasons we love lies more than the truth. But conspiracy theories do have an extra advantage. They’re charming because they’re created with the same technique used for novels and movies. What is this technique?

Novels and movies are fun. They impress us with bold, smart characters because we can identify ourselves with them. They move us with the sufferings of the heroes because through our mercy for them we are relieved of our own sufferings. All the action entertains us when it agitates our quiet and unmoving lives.

Philosopher Aristotle wrote a marvelous book about the art of theatrical plays; it’s called “Poetics”. In his analysis of the technique of playwriting he reveals why we’re so much charmed by fiction. Here, I will mention four important parts only:

1. The difference between a historian and a writer of tragedies, Aristotle says, is that the writer of tragedy should not narrate things that actually happened, but “what could or would happen either probably or inevitably”. (1451a)
2. “A whole is what has a beginning and middle and end”. (1450b) The chaos of our world is put into place.
3. “Every part of the story should be justifiable”. ( 1455b)
4. «Since tragedy represents not only a complete action but also terrible incidents, this happens mostly when the incidents are consequence of another. In that way, the incidents cause more amazement than if they had occurred mechanically or accidentally.” (1452a)

The same principles identified by Aristotle apply in screenplays of modern movies. Everything has an explanation and all the actions of the plot serve a purpose. While the story progresses, the explanation of the hero’s behavior is revealed or implied. Nothing is inexplicable.
However in real life, things also happen with no explanation, randomly or accidentally. Or even if the cause can be found, it takes a lot of scientific research and hard work, and so it is not fun at all. When an airplane just disappears, it’s annoying. We always want to know How and mainly Why it happened!

Maybe years later, investigators will find out that a simple instrument failure was the cause that brought down the airplane in an area not easily accessible. “How did it happen?”, we ask again skeptically. What caused it? Whose fault was it? What was the purpose served by this accident?

These questions cause stress and we’re in agony of finding the answer. That is why Aristotle wrote that “in theatre you shouldn’t tell a true story, but a plausible one which will explain what and how”.

But do we need to know all the reasons and purposes?
In the same book Aristotle gives his definition of tragedy: “with fear and mercy comes catharsis of our own sufferings”. Think about it a bit; when do you feel mercy for the victims of the plane crash? When investigators find out there was a faulty instrument that brought the plane down, or when it is revealed that terrorists have captured the plane and hold the passengers hostages in the middle of the jungle? What scares you most?

Weirdly enough, stories that make good novel material charm us although at the same time they scare us more than cold and random truths. And they charm us because they offer catharsis and put the chaos of life into place and give it meaning! Often enough they offer much more than meaning. They give us value!
Exactly this happens with conspiracy theories as the first one mentioned in the beginning. These few almighty people who rule the world, are so tiny compared to our insight. They couldn’t fool us even though they hold all the power! And those who poison our brains to stupefy us, have failed with us, their poison had no effect on us. Why? Who knows? No one wonders.
What matters is that we believe we are smarter than them and we can reveal their dark intentions, no matter how hard they try to conceal everything. We’re also smarter than the majority of our fellow citizens who were stupefied by the same poison that had no impact on us. We are so special!

The brain is complex and playful. Its most playful region happens to be the most ancient one: the Hippocampus and the Amygdala. This part of the brain existed before the development of the Neocortex, which is responsible of processing incoming data and putting our thoughts into rational order. The Hippocampus and the Amygdala react to stimulus in the most ancient and raw, unprocessed way. This process is super-fast:
Let’s say at some point you’re laden with groceries, you slip and you fall down the stairs. The Hippocampus records this incident and so you remember it was evening and you were about to bake your favorite cake and you were wearing your favorite blue shirt. But from then on, what makes you worry the most every time you walk up the stairs with groceries is the impression created in the Amygdala during your fall. The Hippocampus knows and tells you that it is this specific staircase that made you fall. But the Amygdala brings back the agony of the accident whenever you see stairs.

The feelings of impressions of the past we have saved inside are the groundwork we use to interpret and react to any events in the future. This mechanical reaction of ours even occurs for incidents that only slightly resemble our initial experience. This reflex and autonomous function of the Amygdala happily welcomes the charm of conspiracy theories upon us.

For example, bad incidents of freedom restrictions we’ve experienced in the past, have carved unpleasant impressions into our brain. Deep inside we feel that “the rulers are bad, greedy and ready for anything”. So when the 9/11 attack on the World Trade Center of New York happened, it was enough for someone to say “the government did it” to make our heartstrings wring. This information matched things we already thought or believed. Next, the Neocortex tries to make a decision on reason and facts, but we already feel comfortable with the conspiracy theory. Then all kinds of conspiracy theorists embellish the story with all sorts of nice details, and there it is: our mind is charmed by a colorful novel.
Anything fitting our stereotypes is welcomed. The opinion that there are indeed some lunatics who revel in violence and are ready to blow themselves up and take everyone else down, seems too irrational. “It can’t be, there must be a secret agenda”, this appears easier to believe.

The harsh truth is that we live in a chaotic world and we’re all desperate to find meaning and purpose. Sometimes this effort has a good effect. Our ability to compare different situations and find their common pattern has helped mankind to develop. But it was necessary for both parts of the brain to work together until we managed to become the intelligent humans we are today. Whatever our emotional memory imprints, is afterwards processed by reason. And what do we get of this combination? Science!

Yet, it is wrong to assume anyone who believes in conspiracy theories has to be a fool. Simply, they have let their logical intelligence grow weak by not feeding it enough. They trust the pronouncements of the emotional part of the brain; after all it’s always the first to react. They settle for this and prefer to enjoy and spread interesting stories full of intrigue and adventure.

However, we should not rule out any weird story as fake, even if there’s not enough evidence. Maybe tomorrow, there will be evidence. But ‘till then, we should process it reasonably before believing it or, even worse dispersing it, because some of these theories can be extremely dangerous. Our emotional memory has to work together with our reasonable memory. It’s the only way to judge whether we’re observing an incomprehensible story, or just a simple to understand and plausible novel.