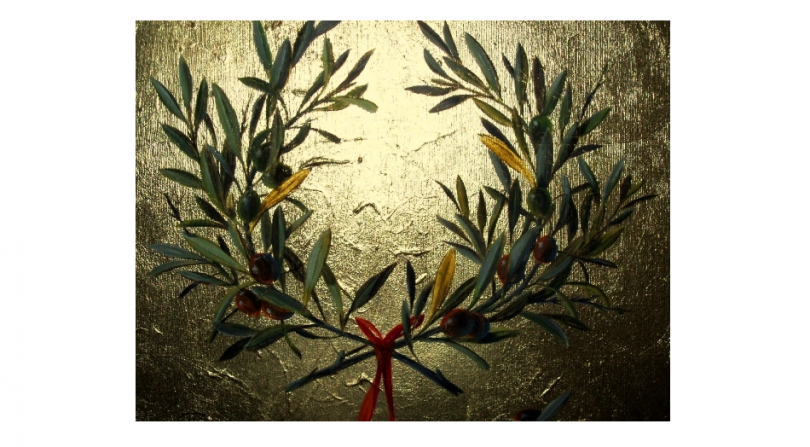 “Good heavens, Mardonius, what kind of men are these that you have pitted us against? It is not for money they contend but for glory of achievement!” Those were the words the commander of the Medes in Xerxes’ army, Tigranes, spoke to the king’s general when he found out that the prize for the Greek athletes is just a humble olive-wreath.

As a matter of fact, this humble wreath made of celery, laurel or wild-olive branches would change the winner’s life forever. And this was especially true for Olympic champions. They were given the right to erect their statue in Olympia and, in many cases, a statue would be erect in their hometown, where they were welcomed by their fellow citizens as heroes and honored for the rest of their life. Additionally, the winners were granted a steady income from the state and were exempt from taxes. But some of those athletes were even more adored and have reserved their place among the most famous Olympic champions in history.

They were the greatest stars of their time and they would have been on teen bedroom posters, had these things been invented back then.

Milo of Croton, the Pythagorean wrestler 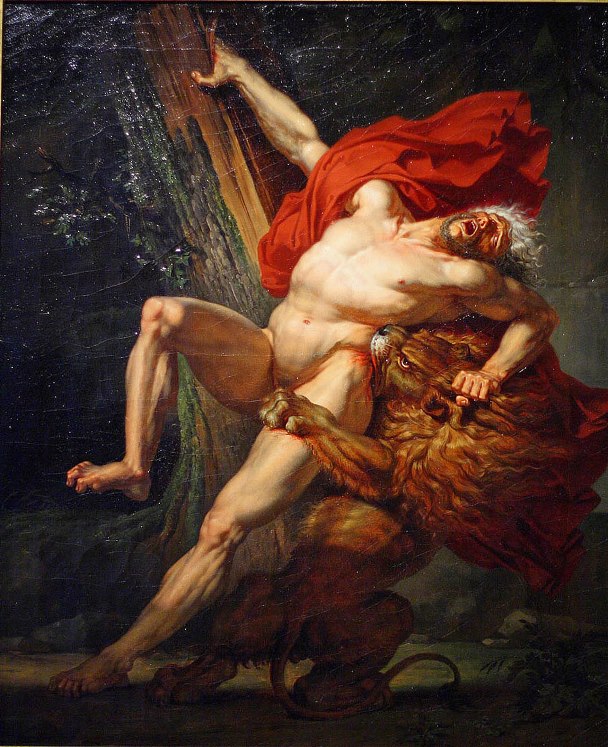 Legendary Milo of Croton was the wrestling champion throughout his 24-year career and won all major Panhellenic agons (sports festivals). Ten times the agons of Isthmus, nine times of Nemea, five times the Pythian festival of Delphi and was the winner in six Olympiads. He first won the boys’ wrestling competition in the Olympiad of 540 BCE and won 5 consecutive Olympiads as an adult from 532 to 516 BCE (62nd – 66th). Milo would not retire and returned in his 40’s to the 67th Olympiad. His young challenger, Timasitheos, won not by overpowering him, but by avoiding Milo ‘till he was worn out.

Milo enjoyed showing off his legendary strength for his friends’ amusement and also protected them on several occasions. One day, in a hall where the Pythagoreans met (he was a follower, and maybe brother-in-law, of Pythagoras) the roof started collapsing and Milo stood and supported the central pillar until everyone escaped to safety and then got out saving himself.

It was not only athletic glory and pride that Milo brought to his fellow citizens of Croton, but he even helped in warfare. When the neighboring town of Sybaris attacked Croton, Milo entered the battle wearing his Olympic wreath dressed like Hercules in lion’s skin and led his town to victory.

Unfortunately, Milo’s death wasn’t as glorious as he deserved. Wandering through the forest he saw a half-torn tree with its wedges still inserted into. He got tempted to rip the trunk by using just his strength, but the wedges fell out and his hands got trapped. Legend has it that he fell prey to wild wolves.

Theagenes of Thasos, the healing god 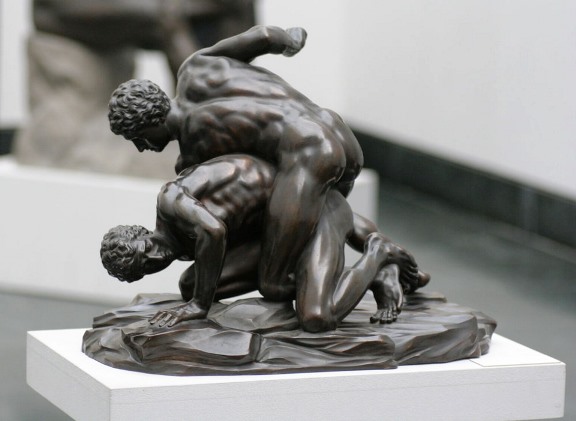 He was called son of Hercules, but in fact his father was Timosthenes, the priest of Hercules’ temple (you can visit its ruins on cape Evraiokastro).

As a child, Theagenes removed a bronze god statue from the agora of Thasos and carried it home. Obviously, his fellow citizens got enraged with this act of sacrilege and some of them even asked for the death penalty. Luckily, an old man stood up for the child and convinced them to show mercy. Theagenes put the statue back in its place and thus the citizens of Thasos didn’t miss the opportunity of seeing the glory this little naughty boy would bring to their island when growing up.

Theagenes won his first Olympic wreath in boxing in the Olympiad of 480 BCE, just a few months before the glorious Battle of Salamis, and returned four years later this time winning the pankration crown. In addition to his Olympic victories, Theagenes won numerous victories in other great agons competing at boxing and pankration. Ten times at the sports festival of Isthmus, nine times at Nemea and three times at the Pythian festival of Delphi. Interestingly enough, he even once won the long-distance run in the agons of Pythia in honor of Achilles. In total, he had 1400 victories in his career.

We can easily assume that he was the most famous citizen of Thasos at his time, as it was the case for all Olympic champions. When he died, the people of Thasos memorialized him with a bronze statue, to remember and honor him forever. However, there was an athlete who had competed against Theagenes numerous times but had never won a match; and he was really upset about it. Every night he came to the statue and beat it, until one night it came loose and fell on the raged opponent, and killed him. His sons prosecuted the statue for murder and demanded justice for their dead father; the judges decided the statue to be thrown into the sea.

However, famine hit Thasos in later years and the people sought the advice of the Oracle of Delphi. Pythia told the islanders to welcome back all the exiles, and so they did, but, still, the crops wouldn’t grow. Once again, they asked the oracle for help and Pythia replied that they had forgotten to bring back Theagenes. The statue was repositioned after local fishermen managed to locate and retrieve it. The famine stopped, the crops started growing again and thus, Theagenes was deified and worshipped as a healing god.

Diagoras of Rhodes, the happiest man in the world 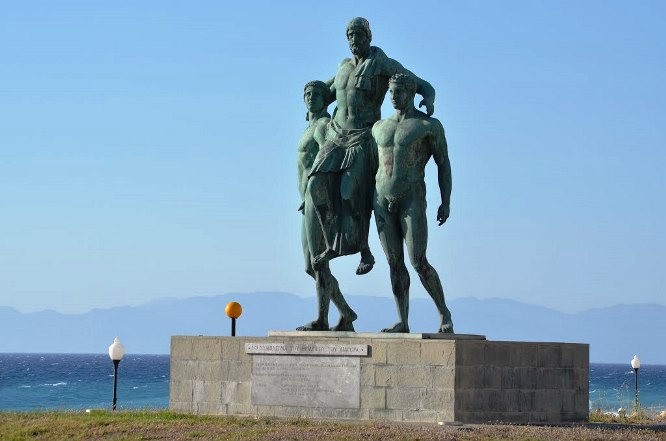 Diagoras of Rhodes descended from Damagetus, king of Ialysus, and was a member of the Eratidae family.

The boxer from Rhodes was the example οf a noble athlete and his name remains in Greek tradition as the son of god Hermes. This “tremendous, straight-fighting man” rose to fame not only for his great triumphs but also for his virtuous character, equally. The poet Pindar celebrates Diagoras’ great victory in the Olympiad of 464 BCE and prays for him to Zeus:

“…grant honor to the man who has found excellence as a boxer, and grant to him honored grace in the eyes of both citizens and strangers. For he walks a straight course on a road that hates arrogance, knowing clearly the sound prophetic wisdom of his good ancestors…”

Pindar’s “Ode for Diagoras” was inscribed in golden letters at the temple of Athena at Lindos.

Diagoras won four times at the agons of Isthmus, twice at Nemea, at least once at the Pythian festival of Delphi and won numerous times in local competitions in Rhodes and other Greek cities. One would assume that he had reached the peak of his fame and glory when he retired. But that wasn’t all. He was blessed enough to see both his sons crowned with the crown of victory in Olympia! In 448 BBC, Damagetus was winning the pankration for the second time and Akousilaos won the boxing the competition. Then, the two brothers lifted their father and carried him on their shoulders while the crowd on the stands were cheering vigorously and showering them with flowers. During this triumphal ovation, a spectator shouted: “Die, Diagoras; you will not ascent to Olympus besides”, meaning that Diagoras had reached the highest peak of glory a mortal could ever reach. At this moment of ultimate glory, Diagoras died in his sons’ arms, being the happiest man of the world!

An incident during the Peloponnesian War displays how much Diagoras’ family was respected all over Greece. At a naval battle, the Athenians captured Diagoras’ third son, Dorieus, who had won the pankration title in three successive Olympiads as well as in all major Panhellenic agons from 432 to 424 BCE. As it was customary practice, they’d other demand ransom to release him, or he would be killed. However, they released him immediately, without a second thought.