At the time, when Cleisthenes established the first democracy in Athens, the memory of Peisistratus’ and his sons’ tyranny was still fresh in peoples’ minds. Fear that this newly formed political system could be overthrown anytime was the strongest and deepest motive to establish the institution of ostracism. Aristotle tells us that the Athenians would force to leave, through ostracism, anyone who had become too powerful and influential either because of extensive wealth or due to political influence. When the Athenians would banish somebody, it was not a punishment for a crime. Crimes would be adjudicated at court. Ostracism was a proactive way to limit the danger of a new tyranny to arise.

The process of ostracism was held each spring at the Ecclesia (peoples’ assembly) of the city, if during the previous assembly it had been decided upon holding this annual vote. The citizens would write the name of the person they wanted to be cast from the city on an ostracon (piece of ceramic) and put it in hydrias (pots). If someone’s name was found on more than 6000 ostraca, the citizen would have to leave the city within ten days. Plutarch, and only he, claims that there had to be at least 6000 ostraca and the name with the most ostraca would be banished (no matter the number), but the first theory is probably correct.

The “pronounced” was allowed to return to the city ten years later and could go on with his life as usual, for his fortune and property would still be intact. However very often, the Athenians would call back great personalities sooner when they were in need of their services. Over the years, ostracism was also used by political wings as a specious, but entirely legal, way to get rid of political opponents.

Following the Peloponnesian War, ostracism was no more of use as tyranny did no longer constitute a danger for the city. Now the danger would not be a single person, but a whole political wing, namely the oligarchs. The institution still existed, but the Athenians would not choose to hold this vote anymore. However, they established the “graphē paranómōn”, meaning that any citizen could sue another for having proposed a bill contrary to the laws. As far as it is known, the last to be ostracized was demagogue Hypervolus, successor of Kleon as leader of the pro-war wing, in 417 BCE.

Aristides the Just, who was too moderate

Athenians loved him for his integrity and gave him the nickname “the Just”. He was the conservative leader of the farmers’ wing, who served as foot soldiers (hoplites) in the army, and was the opponent of great Themistocles, leader of the lowest social class (thetes) wing who served in the navy. Aristides’ political vision was to grow the agrarian economy and to achieve long-lasting peace with Sparta.

The Athenians decided to exile their beloved general because they got convinced it would be beneficial for the city to follow Themistocles’ program and empower the navy. Aristides, loyal to his conservative ideas, opposes this change strongly and gets exiled by the Athenians in 483 BCE. He moves to Aegina only to return three years later when Themistocles calls him back to assist him in the Battle of Salamis. In 479 BCE, Aristides gets elected as general once again and leads the Battle of Plataea.

In the years to follow, Aristides is busy with the finances of the Athenian (or Delian) League and travels to the allied cities often. When he passed away, he received the highest funeral honors at Phálēron, his son Lysimachos received reimbursement from the city and his daughters were endowed, as Aristides hadn’t left any fortune behind.

Themistocles, who was too ambitious 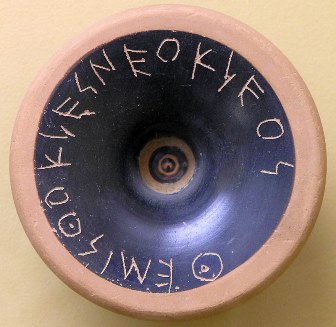 Ten years later, it is the turn of great Themistocles to see his name written on the ostraca. This time, the Athenians got persuaded by Cimon, who was trying for reconciliation with Sparta.

The real reason behind Themistocles’ exile was the hatred the Spartans had for him back from the time, when he tricked them and had the Walls built, despite their objections. So now, as Cimon, friend of the Spartans, is in power, empowering Themistocles would pose a threat to the smooth, but always fragile, relations of these two powerful cities. This would in turn make the liberation of the Greek cities under Persian occupation in Asia Minor impossible. Cimon convinced the Athenians about his political program and in 473 BCE Themistocles was cast from the city. Nonetheless, the decision was not solely made for Cimon’s program. There was a rumor that Themistocles, with Pausanias, had made a deal with the Persians to help him get total control of Athens. Given Themistocles’ ambitious personality, the Athenians were afraid that if they didn’t stop him, it would become impossible to control him. However, there are no historical data to confirm this rumor spread by the Spartans.

Themistocles moved to Argos, only to be forced to leave a while later facing the Spartans’ hatred. He then ends up in the court of the Persian king, Artaxerxes, who grants him the incomes of three Asia Minor districts.

Thucydides, the historian, says that a disease killed Themistocles, but other sources say he took poison when the Persian king asked him to assist in quelling the resistance of the Egyptians, because this would be against the interest of Athens.

Cimon, who was a friend to the Spartans, too much

Not even Cimon managed to escape the “curse” of the ostracon. A decade later, Sparta asks for Athenian help to quell the rebellion of their helots (slaves). The Athenians decide to send 4000 foot soldiers under the leadership of Cimon. But, “when they realized it would impossible to take Ithome (where the helots had barricaded themselves) by raid, the Spartans got worried that, if they Athenians, who were courageous and progressive, stayed there for too long, the besieged helots would influence them to go for a coup. And that’s why they sent them away; them of all the allies.” This insult was too huge for the pride Athenians and, as soon as they heard the news, they turned to the opposition and against Cimon, who would pay a high price for his friendship with the Spartans. The disappointment and rage of the Athenians, even of Cimon’s supporters, was far greater than their love for him. In 461 BCE, Cimon is ostracized and the road opens widely for the glorious political career of the opposition leader: great Pericles.

Four years later, Cimon, even though still in exile, will fight along the Athenians to push back a sudden Spartan attack at Tanagra. All his friends get killed in battle, the Athenian army gets crushed in debacle, but the Spartans, too, suffer severe losses and return to their city.

In this year (457), Athens becomes the dominant naval power, the Athenian Hegemony stabilizes and the defense of the city is almighty. Cimon leaves Athens once again, to return in 451 when his exile is officially ceased. He was killed or died of illness in Cyprus the next year (450 BCE) during the siege of Kition (called Larnaca nowadays), which was a Persian naval base.

The reputation of these great politicians was not spoiled by their ostracism; ostracism was not considered to be dishonoring, as the “Fyge” was, which meant permanent exile and could only be imposed by court after a trial. It was an institution which enabled the citizens to remove someone whose power would jeopardize a vital political program at crucial times. And if their decision turned out to be faulty, they could easily recall him anytime. The political wings might indeed have used it at times to get rid of their opponents, but again, they could not do it alone. They had to persuade 6000 citizens!

Plutarch, from a historical distance of 4 centuries, tries to analyze this unique institution of ostracism and gives us a psychological explanation: Ostracism was a “benevolent consolation of envy”. It was a way to cure the envy that could cause political assassinations, which were very frequent in other regimes at that era. During the two centuries of Athenian Democracy, only one politician, Ephialtes, a member of Pericles’ wing, was murdered. And even for this murder we don’t know for sure whether it was over political or personal differences.