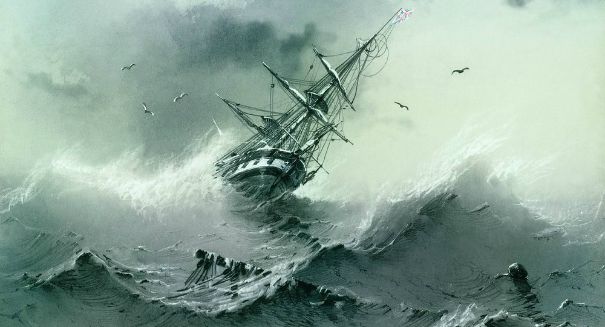 The ship with medicines

In 1989 in the sea of Tuscan, a wooden ship made of walnut wood was discovered. The ship had set off in 130 BCE to bring glasswork and medicines from Syria to Italy. Luckily for us, archeologists found pills among the medicines still dry in their boxes! The American research team presented their lab results in 2010 during the 4th International Symposium on Biomolecular Archaeology in Copenhagen, Denmark. The findings revealed valuable insight into the production of medicine in ancient times.

The pills were a mixture of extracts of celery, carrot, radish, cabbage, wild onion, acorns, alfalfa (lucerne), yarrow and hibiscus. Amounts of sunflower were also detected and this came as a surprise, because scientists used to believe that it didn’t exist in the ancient world until the Europeans brought it back from America. If it’s not a result of a later genetic “contamination”, as some researchers believe, then these pills change the history of sunflower.

Most of the information we have on medicine in the ancient world comes from texts of Hippocrates, Galen, and Dioscorides. Hippocrates created a register of 380 herbs with healing qualities, but pharmacists were using only about 50 of them in different combinations and dosage depending on the illness they were trying to cure. For example, we know that carrots were among the most popular pharmaceutical plants and mostly used as antidote for poisonous stings and as diuretic.

Apart from herb extracts, the pills also contained a mixture of animal and vegetable lipid, starch, pine resin and iron oxide. Having analyzed the formula of the pills found in the shipwreck, researchers believe that the medicine was possibly meant to heal ophthalmologic diseases.

The whole research brought a well-known debate about the effectiveness of herbal medicine back into spotlight. Can these pills heal, indeed?

In 1907, Greek sponge divers discovered a marble head at the shores of Tunisia. The captain of the ship, Georgios Sgoudos, contacted the archeologist Alfred Merlin, who was the director of antiquities at the time, and he made it his life task to explore the spot. Back then, archeological explorations in sea were something new and dangerous. But his wish to try it out, believing he might discover the lost Atlantis, was so strong that he would ignore any difficulty or danger. Along with Sgoudo’s divers, they managed to bring to the surface excellent works of art by 1913: marble and bronze statuettes, architectural members, valuable ornaments. His last finding was a bronze statue of god Heros. Later on, France rejected further funding of the shipwreck search while Europe was at the door step of World War I.

During the 50’s, the exploration was resumed by the crew led by Jacque Cousteau and brought to light dozens of columns and various works of art. But at the bottom of the sea there is still much more. Even whole pillars!

The ship had sailed from Piraeus heading to Rome or Campania, sometime between 70-60 BCE. The works of art, of Hellenistic style, had been commissioned by rich citizens of Rome who used to compete in luxury. But this shipment never arrived! The ship was overloaded and got diverted to the shores of North Africa by a violent storm. Its heavy load shifted and everything got lost at the bottom of the sea.

Here you can watch a wonderful documentary about the story of this great discovery.

Another cargo ship carrying a similar valuable cargo sank in the sea of Antikythera around the same time (75-50 BCE). The ship was loaded with great works of the 4th c. BCE. Loot of the conquering Romans, like the bronze “Antikythera Youth”, as well as replicas of classical sculptures of the time of the shipwreck, like the “Aphrodite of Knidos”. But there were also some originals. Marble statues of Homer’s heroes, depicting the dramatic element in the baroque style of the Hellenistic era. Coins, jewelry and pottery were also discovered. Possible places of origin are Ephesus, Pergamos and Delos. 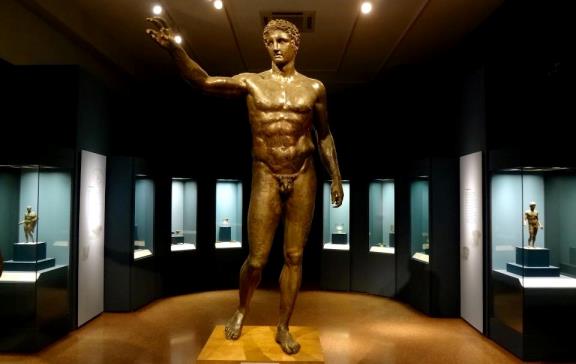 This shipwreck too, was discovered by Greek sponge divers, in 1900 on their way back from Tunisia to Antikythera. The sailors drag up as many works as they could. And amongst the findings was the famous Antikythera Mechanism. This machine could calculate the year, lunar phases, solar eclipses and the years of Panhellenic athletic games in almost any known chronometric system of the time. The machine was possibly constructed by one of Archimedes’ students, or by Hipparchus of Rhodes. 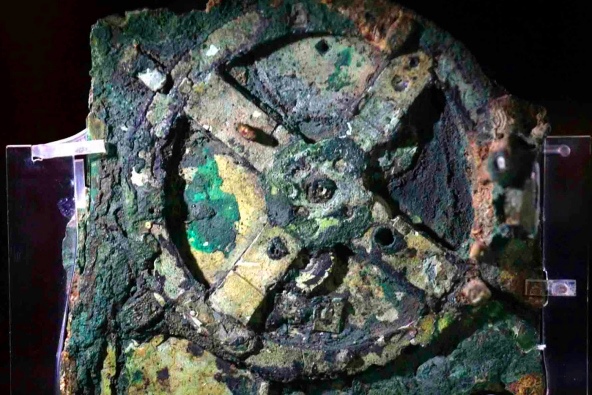 Unfortunately, in 1901 the undertaking stopped after the death of one the divers and the decompression sickness which caused the paralyzation of a few more divers. The exploration resumed in 1976 with Jacque Cousteau’s team and brought even more findings to light. During a new exploration in 2012 – 2014, a bronze two meters long spear, an anchor, a gold ring and bronze bed parts were discovered. The amount of findings and their spread on the bottom of the sea could mean that there are actually two separate shipwrecks and archeologists will continue this search having this in mind. The findings so far, are exhibited in the Archeological Museum of Athens.

In the archipelago of the islands “Fournoi”, between Ikaria and Samos 22 shipwrecks were discovered in 13 days! This part of the Aegean Sea was the crossroad of naval trade routes between East-West and North-South. A hazardous crossroad for ancient ships, as history shows. Those 22 shipwrecks discovered in September 2015, are not all of the same time. Some date back to the Archaic Period (700-480 BCE), some to the Classic Era (480-323 BCE), some to the Hellenistic (323-31 BCE) and others to the 16th c. CE.

The bottom of the sea revealed ancient amphorae from Samos, jars from Chios and also newer pottery (2nd-4th c. CE) from the Black Sea and Palestine. The amphorae contained wine, olive oil and fish sauces.

Until today, only a very small part of the area has been explored and the search is to resume during the next year. 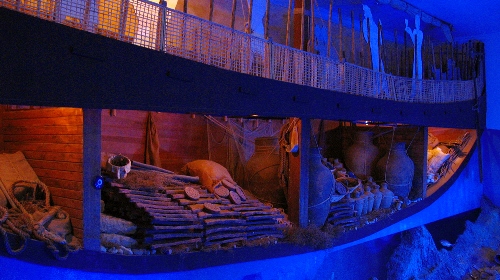 It’s really hard to imagine that in a time as far back as 1330 BCE, there were merchant ships sailing all over the Mediterranean, transporting all kinds of products to each and every harbor of the known world. It’s still the Bronze Age, 100 years before the Trojan War, when the Mycenaean civilization is flourishing in Greece, and Egypt is ruled by Akhenaton and Tutankhamun.

The ship was probably from Cyprus and was heading to either the land of Hittites, Egypt, Rhodes or another harbor of the Aegean. Judging by the cargo, the receiver must had been a king. Bronze from Cyprus, tin, pottery and luxury items, such as the scarab carved with the name of Nefertiti, a golden cup, gold jewelry and ivory, ceramic and daggers from Palestine, Mycenaean style weapons and gem. The merchandise looks like an art exhibition of all the civilizations of the time. There was also food, olives, figs, almonds, pomegranates, coriander etc.

Wherever the ship was heading, it never went. It sank between Cyprus and Rhodes near the shores of Asia Minor and its discovery in 1982 turned a new page in the understanding of the Mediterranean world of that time.

All the findings of the “Uluburun shipwreck”, as it is called, suggest that trough naval trade a “globalization” of cultures had been achieved in the area from the Baltic Sea to North Africa and from the Middle East to Greece.