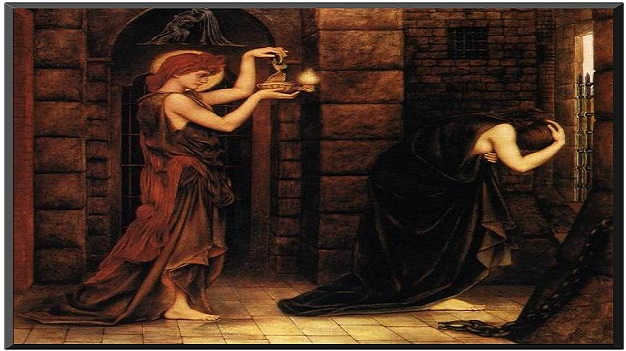 Those who are in some kind of power, will assure you that the most effective tools of their politics are hope and fear. A crowd of scared people will easily buy hope and that’s why Napoleon Bonaparte called the leaders “dealers in hope”. On the other hand, a crowd fed with hope can easily be terrified. Although it is impossible for us to live a life without hopes and fears, our freedom depends on the extent to which we can manage them successfully.

The suspicious gift from the gods

In ancient Greek Mythology, hope lies within a jar Zeus gives as a gift to the first woman of mankind, Pandora, with the instruction not to open it. But she, being too curious, opened the lid of the jar and all the misfortunes poured onto mankind. Panicking Pandora tried to close the lid, but the only thing she managed to keep inside the jar, was hope. Isn’t it impressive that Zeus had put hope inside a jar full of misfortunes? Even weirder: only hope didn’t pour out of the jar onto people. Hope is provided by those in power at certain timing and at proper doses so that they won’t have to face desperate citizens; it is very difficult to handle desperate citizens.

The German philosopher Nietzsche concluded that hope is the worst of all evils, because it prolongs the suffering of people and Aristotle called it a dream that we see awake. Even though hope can have a positive impact on our life, it can also lead us to inertia and make us credulous and timid, if we let it dominate our dreams. While hoping, we might end up watching our life pass us by while we are waiting for a person or a god to change our luck, while convincing ourselves that we are weak and dependant on external factors. “The strong have will, the weak have hope” is a German saying, and I believe it expresses exactly the opinion of the ancient Greeks when they talked about “a dream that we see awake”.

How is it that Greeks could manage sorrow, pain, disappointment and all types of unhappiness, when hope was still locked up in that jar? We would need a whole book to answer this question thoroughly, because their whole ethics and culture was structured in a way that they wouldn’t need to rely on hope in order to make it. But there was one activity that could cure the “illness” of hope effectively: theatre.

Have you ever read a Greek Tragedy? Greek Tragedies are theatrical plays in which, in contrary to what we’re used nowadays, the hero ends up in despair and disaster suffering under the consequences of this own choices, and not only. Often, he is led to disaster without even having done anything wrong, just because he was the victim of a bad conjuncture. The viewer would go to the theatre already knowing the beginning and then ending of the story. What would it be into for the viewer then? Catharsis! He would identify himself with the hero reliving his drama with him and tuning in to his reality. Hope plays no part in Greek Tragedy, not even when Euripides introduced the “god from the machine” (“deus ex machina”).

Today, we still use to quote the phrase “deus ex machina” when a sudden and unexpected solution comes up and solves a seemingly unsolvable problem. But a god showing up in ancient theatre to solve a complicated situation wasn’t unexpected at all. It is he who caused the problem to begin with and Euripides “forces” him to solve it, letting the viewer know that even gods are not allowed to ignore the consequences of their actions. And don’t forget that Greek gods were the image of humans. They make mistakes, they regret, the get upset, they love and hate like humans do, just in another dimension. What the viewer experiences, even when the drama is solved by divine intervention, is the catharsis of having normality being restored by the who interrupted it in the first place. That way, the experience of the viewer is not the hope that a god will come to take care of his mess.

The ancient viewer does not hope for magic solutions, but how does feel when he faces the tough side of reality? How does he stand before the violent twists and wrongdoings of life? He feels mercy and fear and this is how he reaches catharsis, Aristotle says.

The son of the god of war

Phobos (fear) is the name of Aris’ son. Along with his brother Deimos (terror), they follow the warlike god to battles. Does it make sense to have fear reign in war and theatre?

The viewer of Ancient Tragedy suffers with the hero and his sufferings, while fearing the possibility of those things happening to him too. In fact, Aristotle says, the viewer’s fear reaches the peak the moment he sees the hero ready to make an unrecoverable mistake without knowing it. Then, the only development that can reduce his hear, is the revelation of the truth. When Oedipus killed his father and married his mother, not knowing it was his parents, the viewer feels terror and mercy. When the truth is revealed to the hero later on, the viewer has to come in terms with the fact that the mistakes we make, even unknowingly, have consequences. Always. Oedipus can’t correct the situation anymore, but know he knows the truth. Now the viewer’s mercy is reduced, because although the hero is still unhappy, at least he is not at the mercy of this ignorance any more. Fear is reduced too as the viewer no longer worries for what is about to happen. What is done can’t be undone. Content comes with the understanding and acceptance of what is really going on, even if the hero still suffers undeserved. Catharsis is achieved when you keep pace with reality.

“As in theatre the actor is more popular than the writer, same way did the hypocritical art prevail in politics because of the depravity of the citizens”, says Aristotle in “Rhetoric”. The art of actors is also used by politicians who want to achieve their goals, and one of the goals is to create fear.

A politician, who knows and understands the mentality of his audience, can convince the crowd that he can relieve them from the things they fear. And here is what we fear most, things Aristotle already knew:

The great philosopher adds: “There must be hope for people to look forward to”, because he who doesn’t hope, doesn’t fear!

A person, who builds his plans upon hope, deceives himself trying to deal with his fear of reality this way. As long as one fears so much, reasoning gets blurred and one surrenders to those dealing hope. In this vicious cycle, hope prevents fear from leading the soul to catharsis and deliverance through deep knowledge and understanding of reality. You can’t be free when trapped in this vicious circle of confusion. And it takes courage to say the words of Nikos Kazantzakis: “I hope for nothing, I fear nothing, I’m a free man”.