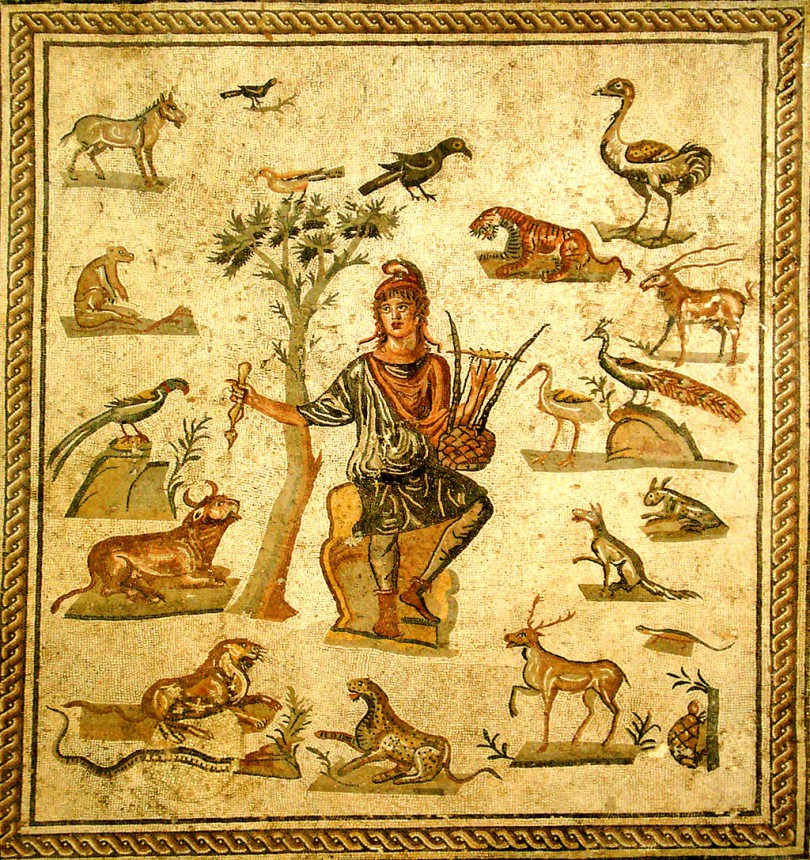 Orpheus was the son of Thracian king Oagreus and Muse Calliope, daughter of Zeus. His whole life and activity is an expression of divine harmony, whose result was his remarkable musical talent: with his lyre and his divine voice he would charm humans and animals. Sometimes, the power of his music would even move lifeless objects! Of course his was a student of god Apollo, the god of light and music.

The most well-known story about Orpheus is his descend to Hades when he tried to bring back his cherished wife Eurydice to life. But on their way back on the stairway of the Underworld, his wish to see his beloved one was so intense that before re-entering the world of the living, he broke his promise to Hades and looked back to see her. And that is how he lost her, forever. He too died soon after out of grief. Other versions of the myth tell us that he was savaged by the Bacchae, or that Zeus killed him with his lightning when he disclosed sacred mysteries to the humans. The Muses buried his body in mount Olympus and his head and lyre were moved from the river Evros to the island Lesvos in the Aegean Sea.

In ancient times no one questioned, except Aristotle, that Orpheus was a real historic person who had lived in the 13th century BCE, many generations before the Trojan War. Nowadays researchers tend to believe that there were actually five different persons within the centuries with that name.

There is a generally unknown and unconfirmed theory, but it’s particularly interesting. According to this, the first version of the Orphic texts was written in an archaic language which was referred to as “the language of the gods” by the ancient writers Proclus and Iamblichus. Thomas Taylor speculates that the language dates back to the time of the Pelasgians and it could be a very ancient form of Etruscan or Aeolian languages. It might even be the language spoken by the citizens of Atlantis, the continent that suddenly submerged into sea and disappeared, as Plato describes in “Critias” and “Timaeus”. When the foreshocks began, maybe some of the inhabitants of Atlantis had foreseen the catastrophe coming and decided to escape to the islands nearby. The Aeolians among them travelled to sea for a long time until they settled on the coast of Thessalia and named the area “Aeolia”. According to some theories, the “Argonautica”, the orphic narrative of the argonautic expedition, could be the story-telling of the Aeolian expedition after the catastrophe of Atlantis. In that case, we could date Orpheus much further back in the past, even though his name is not mentioned by Homer or Hesiod.

As Plato says, priests of Ancient Egypt revealed to Solon that the destruction of Atlantis had occurred 9000 years before their time and that nothing was extant but a few names of great people and oral traditions of their works. Plato explains why: “Because every time a generation survives a flood, most of the survivors are people who live in the mountains, and they are uneducated“.  If that’s the way things happened at the time of Orpheus too, it’s not to wonder that future generations had forgotten about writing, technological progress and religion as taught by Orpheus. Centuries later at the time of Homer and Hesiod, the old religion and peoples’ views about the gods and their relation to them, have changed. New ethics and societies arose in the Greek landscape. The names of the gods were still the same, but now they had human characters, they had flaws, they interfered in human affairs and they could save or destroy anyone. Competing against the gods or believing one is better than them, is an unforgivable hubris. But at the time of Orpheus, it seems that the relation between gods and humans was more occult.

The orphic texts we have nowadays are of a later time, mostly written during the 6th century BCE. At a time when the Orphic ideas made their way back into the limelight. Priest Onomacritus gathered and recorded all oral orphic traditions and boosted the forgotten worship of Dionysus.

The revival of this ancient worship reconnected the gods of Homer and Hesiod to their orphic past and this created the famous Hellenic pantheon of the classic era. Those were the gods worshiped by the men who set the foundations of western civilization. The first to adapt this worship and follow the “Orphic life” strictly, were the Pythagoreans. Pythagoras was taught about Orpheus by his teacher Pherecydes and by various priests in Egypt and Asia Minor during his travels. Plato too, adopted the orphic doctrine of incarnation and the successors of his academy (the Neoplatonists) analyzed the orphic theology and created through this, the theory of theosophy.

Orpheus’ heritage in western religious thinking is first of all, the belief that men carry the divine element inside them and they can cleanse their soul of material elements. It also spread the concept of men being able to communicate with the gods only when in trance, because then and only then you can detach from your material existence and “see” things unseen. Orpheus’ mysticism promotes the identification of men with the gods as the only goal of life and salvation to escape the verdict of death. However, it points out that this process is the responsibility of each person individually and if you manage to conquer salvation, the credit is all yours. Nothing will be given to you as a divine gift; you have to fight for anything yourself.

If the orphic religion was indeed the state religion of legendary Atlantis, it’s likely that this belief was the true substance of their great civilization. Because when men get to know the “god” inside them, they are capable of achieving the greatest things.