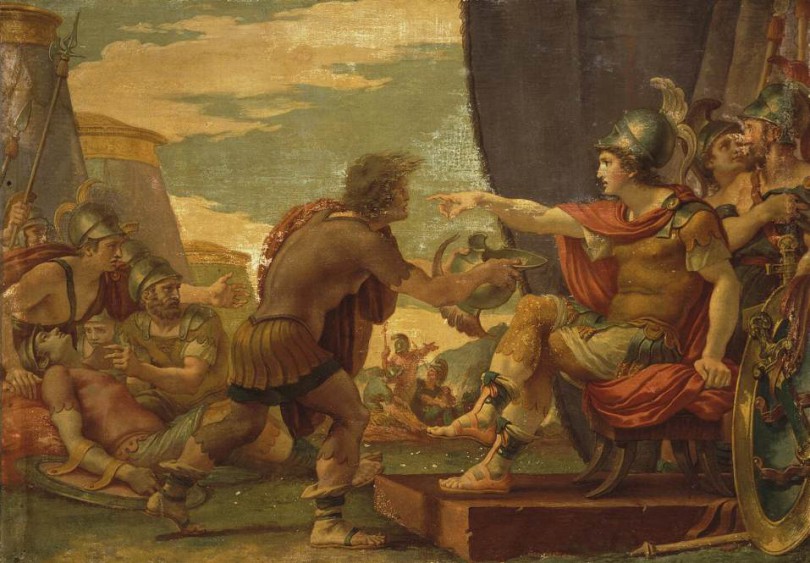 “Become great, be eminent, be the best”. This competitive attitude was the driving force of ancient Greece in every aspect. This still is the driving force today, at least for countries with important achievements to show. “Ever to excel, to do better than others” has been the incitement for young people since the time of Homer. Excellence was the most pleasing achievement.

Achilles was excellent. This quick-tempered and spoiled king who wouldn’t put up with anything. But… he was unbeatable in battle! For the ones who had him by their side he was the guaranty to success.

Ulysses was excellent. The ingenious and cunning king of Ithaca who, without lacking bravery, won most of the battles using his words and ideas.

Thales of Miletus was excellent. One of the “physical philosophers”, one of the creators of philosophical thinking. He excelled in the intellect because he managed to use it in an unprecedented way for his time: instead of sticking to the perception of the world passed through myths, he looked into the world to find answers.

Themistocles was excellent. This resourceful and agile General, who knew how to convince even the most narrow-minded. His remarkable intelligence saved the whole population of Athens when the Persians invaded and destroyed everything.

Pericles was excellent. The cold and distant General who was elected for 14 consecutive years without ever flattering anyone. Because he was the best speaker, the best in crisis management and because he was so cold-blooded that people called him Olympian. He also excelled in endurance. Despite the pounding by his political opposition, he did what he thought was right for his city. We still benefit ethically and materially by the creations of this excellent man.

Alexander was excellent. He was so outstanding that he was called Great. Excelling in soul-strength, in determination, in strategical thinking, in goal achievement. To this tough stubborn man Greece owes the glory accompanying her name until today.

Excellent, each one in his field, were many others too who were lucky enough to live in a time and environment that encouraged excellence and rewarded the living with honors and the dead with posthumous fame. Sculptors, poets, orators, philosophers, military men, politicians, scientists, athletes, they all left a priceless treasure behind – which still feeds our mind – because they wanted to be and could be excellent in their field. Of course, one could also excel in trade, if he cared for material benefits only. But no matter what anyone would choose to excel in, he’d know that there are boundaries not to be crossed.

Ancients loved fairness, but they didn’t think much of equation. He who was very talented, not only could, but was obligated to develop his talent and become great, this way honoring himself, his family and his homeland. Yet, they were not naïve. They were well aware of the fact that human ambition can easily result exaggeration and they didn’t despise anything more than the lack of moderation. Competitiveness had its limits which were known to all from the day they were born.

We can sum them up with five Delphic maxims:

Nothing to excess (ΜΗΔΕΝ ΑΓΑΝ), nothing in exaggeration. Everyone has to control himself inside the boundaries set by the society that raised him.

Despise insolence-hubris (ΥΒΡΙΝ ΜΙΣΕΙ). Transgression of human measures and excessive arrogance are not left unpunished. He who believes that just because he is great in his field he can pass as a god, will soon lose his mind and will be led to psychosis. Then, Nemesis intervenes, the ultimate punishment.

Down-look no one (ΥΦΟΡΩ ΜΗΔΕΝΑ), don’t down-look anyone; no matter how high you’ve reached. A great man has to be polite and facile. This way, he protects himself of arrogance and everyone around him benefits.

Practice what is just (ΠΡΑΤΤΕ ΔΙΚΑΙΑ). Give anyone what he deserves, that is the definition Aristotle gave for righteousness. Don’t give to him who does not deserve it nor bereave of him who deserves. No matter how high you’ve reached, you can never reach higher than righteousness.

Acquire wealth justly (ΠΛΟΥΤΕΙ ΔΙΚΑΙΩΣ). Wealth and riches were not demonized in ancient Greece. But unrighteous wealth was. One could hunt profit, but had to do it legally and contribute his fair share to the state.

Why should we excel?

The only way to understand life in its wholeness and live fully is the pursuit of excellence. This is how civilization was born, every human wants to become more competent, wants to stand out from the rest, to do things he’ll be admired for, to do good to himself and to the world. This is how thinking, science and technology evolved. Some excellent ones took the big step and solved problems that also bothered the non-excellent ones.

In a world where the less competent would have the same rewards as the excellent ones, what would motivate the wish to improve? And what would be the meaning of trying to conquer the top, if, when finally reaching it all exhausted, you would just find out that the mediocre had already arrived there by chopper?

The wish to stand out, to improve and to make a difference is inherent. Reward is the motive. If there is no motive, this wish will either languish and a great talent will become dormant, or it will turn the talent to the outcast boundaries of society looking for space to develop and be acknowledged and rewarded. If the talented human finds this outcast space, he will turn against the society which could have benefited by him.